Flag frontman tries to OFF! himself 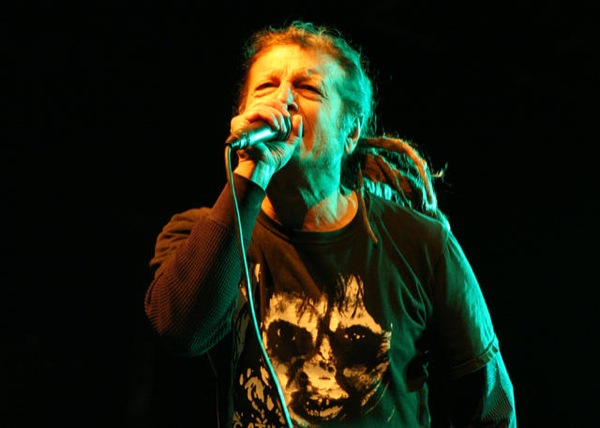 The dreadlocked screamer has remained a player in the genre for 35 years as vocalist for early Black Flag, the Circle Jerks, Off!, and now Flag. Always opinionated and sometimes downright confusing, no one was surprised when he launched into a windy rant during Flag’s Friday performance that began with, “Don’t lump us in with those tea party motherfuckers” and ended on, “Yeah, I’ll watch the Oakland Raiders on TV, but I won’t buy anything advertised during the game!”

Even his bandmates seemed to scratch their heads over that one.

A few hours before Flag’s set, I caught up with Morris backstage and requested a chat for Chronolog, the Chronicle’s Chase Hoffberger and my radio show on SXSWfm. He squinted at me pensively though his circular shades.

“Will you be able to hear me?” he asked.

I held up a microphone.

Austin Chronicle: How does it feel to be in Austin with Flag?

Keith Morris: Well, seeing as I know the gentleman responsible for all this degradation, he who contributes to all these people’s delinquency – Mr. [Graham] Williams! Guy used to book Emo’s. He’s responsible for all of this. I bet all the parents out there are up in arms. They think he’s the equivalent of Frankenstein. They wanna burn him at the stake. They wanna blow up the castle.

Me, I’m a non-regular member of the entourage that happens here. I played the very first Fun Fun Fun Fest with another one of my bands [Circle Jerks]. He put the festival together and had like three weeks to promote it at Waterloo Park. Graham did about 8,000 people, which is pretty good for having such a small amount of time to promote it properly. That was the first one.

My question is, since you always have such hot weather or extremely cold weather, why did he choose to do it in November? This should be an interview where I’m talking to Graham.

AC: Let’s ask Graham the tough questions sometimes, like climate change and why he runs festivals in November.

KM: He’s a climate change denier! He needs to talk with Al Gore.

AC: We saw the other Black Flag doing the first show of their tour in May. Do you think about the difference between your two bands? I know you had to go to court over it.

KM: Greg’s a grown man. He’s done a lot of stuff. He’s done some great stuff. He’s done some horrible stuff. He’s a big boy and he’s quite capable of sorting things out for himself. Personally, I don’t really care. When we first started the band we were best friends. When you’re around a person like that, with each passing day, you catch their drift. He’s just a piece of driftwood.

AC: What do you think about Black Flag’s new album cover?

KM: You know, you’re asking me about all this stuff, and I want to just rattle off a bunch of negative crap and fucking put them down and say they’re horrible and everything like that, but there’s a lot of people out there that still appreciate what he does and that’s all fine and wonderful. I can’t sit here and say, “That’s cool,” or “That’s not cool.” You’re the ones who have to decide that for yourselves. I don’t go there.

AC: Does Flag guitarist Stephen Egerton cut it on those legendary guitar parts?

KM: We’ve heard no complaints. The only guy who’s complained is Mr. Ginn.

AC: You’re playing the last show on the Black stage tonight. What kind of energy are you trying to bring?

KM: Well, this is a party, you know. Everybody’s got to jump around. Luckily, it rained a few days ago, so it’s probably not all dust and dirt and grit. So we would like – because it’s the Fun Fun Fun Fest – for everyone to be in a festive mood. Just because we’re basically dealing with a lot of negative bullshit in what we’re playing and what we’re singing about lyrically, that doesn’t mean you can’t have fun. You’re at the Fun Fun Fun Fest! So you better have at least three times the fun.

AC: You told the

Chronicle that his would be the last Flag show for a while, that you’re going to go focus on some stuff you’d been working on prior. Where’s Keith Morris heading after this show?

KM: I go back to L.A. because my friend Dimitri [Coats] and I are writing a new Off! record. We’re 14 songs into it and we’re recording in three weeks. On Tuesday, I fly to Santiago, Chile, to do a week-and-a-half long tour in South America. So I’m just trying to kill myself. 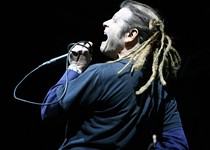 Fun Fun Fun Fest Live Shot: Flag
This is not Black Flag – only it is 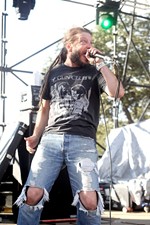 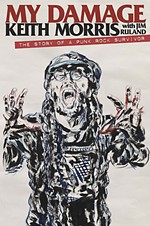 Sheet Music – My Damage: The Story of a Punk Rock Survivor
by Keith Morris, with Jim Ruland