Transmission booker dishes on who’s coming – and who’s not 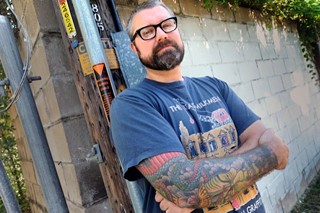 Graham Williams outside Mohawk in 2010 (by John Anderson)

Hardcore heroes, comedy at music festivals, and the ones that got away. Transmission Events principal Graham Williams talks the ins and outs of booking Fun Fun Fun Fest.

Austin Chronicle: Who was your best Fun Fun Fun Fest “get” this year?

Graham Williams: Television was a really special one because they were always on our dream list. We thought it was a long-shot going into it, so when it worked out it was a big surprise. It came together nicely and a lot of times in booking that doesn’t happen.

For me personally, though, it’s Judge. They’re an old New York City hardcore band. I’m a huge fan, and I grew up listening to them. They’re doing a few shows this year. We’re not the only one, but we were part of the push early on and I’m really happy about that.

AC: Is that a band you saw live back in the day?

GW: No, I don’t think they ever played Texas. A lot of hardcore bands didn’t play Texas in the early Nineties. There really wasn’t much of a scene here, and it’s such a big state that getting a band to drive 15 hours to play one show and make a couple hundred bucks in gas money didn’t work, so lot of those bands didn’t make it through Texas.

When their record came out, I think I was in sixth grade. I was still listening to Poison and Motley Crüe at that point, but I became a fan pretty early on and later I got to see some of the bands they formed after they broke up. Their singer was a real mystery in the hardcore scene. He became a trucker and disappeared from music and no one knew what happened to him. There were all these rumors that he had become a cartoonist because he was [named] Mike Judge, same as the creator of Beavis and Butthead and King of the Hill – just random rumors in the scene when I was a kid.

Well, he kind of resurfaced recently and they decided to do it. They’re definitely not as big of a band as some of the other bands we got, but for me, it’s amazing.

AC: That’s what I love about Fun Fun Fun – catching bands from your record collection you never thought you’d get to see.

GW: We feel that way, too. We’re not that old, but there are a lot of bands we never got to see.

Jurassic 5 is another act I’m really excited about. I saw them at Coachella. It was their first show back and it was, without a doubt, the best hip-hop show I’ve ever seen. I didn’t expect it to be that good. I was honestly just going to watch three or four songs before leaving, and I watched the whole set. It blew my mind because it was so tight and the crowd was insane.

It was so interesting, because they outdrew all these buzz acts like Beach House and Local Natives that normally do the best at Cochella, because it’s a very young festival. They outperformed all of them, too. After seeing what an amazing show they put on, I immediately wanted to put them on Fun Fun Fun.

AC: What about someone you wanted to book but couldn’t make work? I remember hearing you were trying to get Frank Ocean, but there was a money issue.

GW: That’s one. We tried with Frank Ocean and it kept going back and forth. I think it was less about money with him, because we offered him a good amount. It was more about availability. He barely ever tours; he’s a studio guy. We were probably in the same boat with a lot of festivals that tried to get him this year. Even though it’s a good time for him to be playing, it’s a bad time because he’s always in the studio. Odd Future ended up doing a carnival concert in California the same weekend as Fun Fun Fun, so it wouldn’t have worked anyway.

The Replacements were one we really pushed for this year and I feel like we came pretty close, but it didn’t work out timing-wise. There’s always a huge list of acts we go after that don’t end up playing, but the good thing is you can keep working on it for the future and sometimes it will happen the next year.

AC: Fun Fun Fun’s comedy lineup is stellar this year. Do you book it?

GW: I do. Getting Tenacious D – who we’re fans of and they’re fans of the Fest – was really fun, and I’m also happy to have Sarah Silverman and Patton Oswalt. We pick comedians who are a little bit edgier, so they’re in line with what the rest of festival is about. We’re not the only festival that does it, but I think we do a really good job at it. There are a lot of music festivals where comedy is an afterthought or it’s awkwardly placed – like it will be sandwiched between bands and you can’t hear the comedian because someone’s soundchecking their bass. We try to have a big comedy club vibe.

AC: Death Grips canceling was no surprise. What happened there?

GW: You definitely take a risk when you’re booking them, but I really like the band. We didn’t think too much of it when we booked them because they played Fun Fun Fun two years ago. Then I just saw them in L.A. at our sister festival FYF, and that was after the Lollapalooza no-show. Both the manager and booking agent assured me 10 times over they’re playing Fun Fun Fun and that they’re excited. Then out of nowhere the agent called and said, “You’re going to hate me, but the Death Grips is taking the rest of the year off to work on a new record and film project, so they’re canceling everything and going into the studio.”

I think, at this point, they’ve cancelled more shows than they played, but we like them, and I’m sure we’ll have them back at some point.

AC: How has your vision for booking Fun Fun Fun Fest changed over the last eight years?

GW: We’ve always approached it the same: book what’s cool, book what we like, book what everyone else isn’t booking. These days we get bigger acts because we’re conscious of having more people to please and a bigger space to fill. Also we focus on making the best lineup for everyone – not just the best for my iPod. 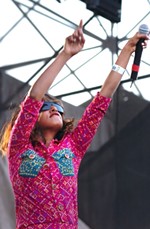