After midnight at the Continental Club Friday & Saturday 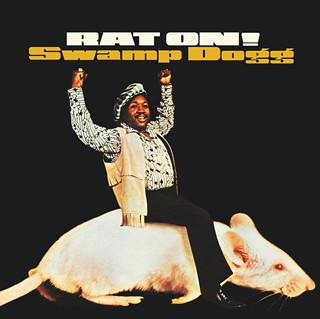 Born in Virginia in 1942, Jerry Williams became an accomplished songwriter and mid-tier R&B balladeer in the Sixties, though it wasn’t until he morphed into Swamp Dogg that he truly left his mark.

Released in 1970, Swamp Dogg’s Total Destruction to Your Mind remains a gonzo soul classic steeped in political tension and dripping with acid. His bizarre sense of humor and worldview put Swamp Dogg in the pantheon of soul eccentrics and he didn’t disappoint when reached by phone at his California home.

“I just got out of the shower and I’m lotioning down and shit,” he shouted into a Bluetooth. “You can put that in your article, let people know I’m clean. Swamp Dogg was taking a fuckin’ shower!”

In an interview lasting more than an hour, Swamp Dogg revealed the secrets of the rodent on the infamous album cover to Rat On! and does his best to explain his sexual attraction to wood nymphs. Here are some highlights from our conversation. Swamp Dogg plays the Continental Club tonight and Saturday along with Dallas bluesman Bobby Patterson.

Austin Chronicle: You’ve written and recorded some sweet love songs over the years. You wrote “Yvonne” about your wife and “Everything You’ll Ever Need,” which is one of my favorites. On the flip side you also have more songs about cheating, fooling around, and philandering than possibly any artist in history. What’s up with that?

Swamp Dogg: I wasn’t exactly husband material all of the time. I grew into husband material. My wife Yvonne, who was two years older than me, she was grown up when she was six years old. When we got married in 1963, she had four little daughters. I thought they were the cutest little sweetest girls in the world and I was in love with their mother and she was in love with me. That’s all it took. Everybody said you don’t wanna marry a woman with a readymade family, you want your own family. But shit, wouldn’t you want someone else to cook your breakfast rather than you cook it? And bring it to your bed?

Shit, I already got a family and they were pretty! I was still relatively young, so she gave me room to become a man, because I was just a boy. When we met I had just turned 20. She made some allowances, especially since I didn’t do anything blatant and nothing in her face. I was just running around like I didn’t have a wife, that’s all. Periodically she would remind me that I had a wife and obligations. She stayed with me right up until the day she died. We were together 43 years and we was gonna be together 43 more if she’d lived.

AC: You released your first record at the age 12. How did you get involved in the music biz so early?

SD: My mother and father had a group that you would consider a lounge act, playing Holiday Inns and that kind of shit. Due to the fact that we didn’t have but two black hotels in Virginia – one in Portsmouth and one in Norfolk – my mother and father would run up on people like Louis Jordan and ask, “Where the fuck do you stay?” We had a real big house and they would invite people to stay with us. I ended up meeting Louis Jordan who was my idol. I got a chance to meet damn near everybody, all of my idols, only because of segregation. The upside was I got to meet these people because of the downside – they couldn’t get no fucking hotel.

AC: And that was the impetus for the social critique of songs like “I Was Born Blue?”

SD: Yeah. There’s a lot of anger in some of my songs, but it’s controlled. I found out one thing a long time ago by watching niggas get killed by white people. You gotta keep your anger concealed. You can’t just be running around, at that time, punching a white man in the mouth or even looking at him straight in the face. When he’s talking to you, you’re supposed to look down, looking at your shoes and shit. I learned to do it because I was a survivor and I planned to survive. When you’re brought up around something it don’t hit you as hard as the sumbitch who just came in town off the bus and right away he sees a white and colored water fountain. I saw the colored water fountain and went over there and drank my water and went about my business. I wasn’t gonna get beat to death over drinking out of a fountain or shittin’ in the wrong toilet.

“I Was Born Blue” helped me vent a lot of anger, but I don’t feel that anger anymore. I can bring that anger to the surface so that you can feel how I felt when I sing it. I don’t really hate anybody. Fuck ‘em. We all going the same way so why take time to hate? Hate will kill you. Hate will fuck you up. Hate is a disease. It will eat you up, just like cancer. It is a cancer. It’ll eat your fucking mind and brain.

AC: You had moderate success recording and performing as Jerry Williams. Why did you adopt the Swamp Dogg persona?

SD: I didn’t feel I could reach out to people as Jerry Williams and tell the same stories. I was a class A opening act. You couldn’t get no better opening act than me, but I was never a closer and I never was going to be a closer as Jerry Williams. First, I don’t look romantic. I don’t exude all of the shit that Jackie Wilson and Chuck Jackson and Tommy Hunt – all those guys – exuded. They walk on stage and bitches had brought an extra pair of drawers to throw on stage, keys to their house and all that bullshit. Ain’t nobody ever throw anything at me but some fruit.

Part of the reason I changed my name to Swamp Dogg is because a dog can do anything. My dog shit on my floor yesterday. Thank god he’s fed kibbles and shit that’s real hard so his doo-doo is hard. I picked it up and threw it away and put him outside. After a couple hours or so he’s standing there barking and looking at me like, “Nigga, you really gonna let me stay out here? Wasn’t nobody up. I can’t open the goddamn door. I had to shit. What would you have done?” So I let him back in, fuck it.

Swamp Dogg wasn’t pretty, he wasn’t tall. He wasn’t any of this shit that turns a motherfucker into a heartthrob. I never was going to be a heartthrob. Unless something new occurred in the music. Like when rap caught on, every ugly motherfuckin’ nigga in the world became irresistible. So something would have had to come along where little short dumpy motherfuckers like me became a phenomenon in music. But until that came along – and I wasn’t gonna wait for it – I became Swamp Dogg and had my own category. Nobody was in that category but me. They finally started comparing me a little bit with Sly Stone, Zappa, and George Clinton. My stuff is considered psychedelic soul.

AC: In my collection I keep your records on a shelf I like to call black acid music. Is that a fair categorization?

SD: Black acid music. I like that. I’m gonna use that. That really sounds like a motherfucker is burning. I did take some LSD, but it wasn’t my constant companion. But you ain’t gotta take but half of one bad trip and it will be your constant companion until the day you die and that’s what happened to me. I’m still fucked up. There was a trip they slipped on me and there was a trip I took voluntarily, and both of them turned out bad so I’m lucky to be here.

AC: Speaking of LSD, “Dust Your Head Color Red” is one of the strangest tracks on a very weird album.

AC: There’s a line that goes, “Crimson valleys where nightingales dance a wood nymph fantasy.” You know you had to be the only brother singing about wood nymphs back in the day, right?

SD: Wood nymphs are actually sexy. If you could get out in the woods with them motherfuckers you could have yourself a ball. They seem to not know where the fuck they are, they just kind of doing ballet jumps and shit. I don’t know, a wood nymph might be some of the best pussy a motherfucker ever had.

AC: I’ve got to ask about what I think is one of the greatest album covers of all time even though some call it the worst,

Rat On! Was that your concept?

SD: Yes, Lord. We had six rats that died until we got one that lived long enough to get exactly what we wanted. We blew the rat up against the black background. Then I sat on a bar stool with my left leg hidden. What most people don’t notice is that the rat does not turn you off because he’s actually smiling. We airbrushed a smile on his face. Now, the reason the smile is on his face is, first of all, I’m representing the black man. The black man has finally got his come up and he’s on top. And he’s kicking ass. He done kicked the white man’s ass to the point that he’s risen.

But the rat, which is the white man, is smiling because he’s saying, “Ain’t no way this nigga is gonna be able to stay up there. He’s gonna fall the fuck off real soon. He ain’t even holding on. Look at him, he’s got his arms all in the air. He should be holding on, the dummy.” He’s smiling because he knows the black is gonna come toppling on down off his back and it’s gonna be business as usual.

AC: Well, I gotta say that’s a far more political explanation than I would have expected.

AC: The follow-up to Rat On! was called Gag a Maggot. What the hell does that mean?

SD: To me, a maggot is the damndest thing. I gotta give you a little maggot history. In the old days you could kill maggots with hot water. Later, you needed hot water and bleach. Now, hot water and bleach they think they’re in a fucking jacuzzi. Ain’t but one thing that’ll kill ‘em: Borax. A maggot to me is the most filthy thing in the world. If you take the filthiest thing in the world, which is a maggot, and you got some music that is so motherfucking nasty and funky that it’ll make him gag, then you got yourself some sho’ nuff funk. Can you imagine something that would make a maggot throw up? It’s just too funky.