Goblins spook life into a long last day of extremes 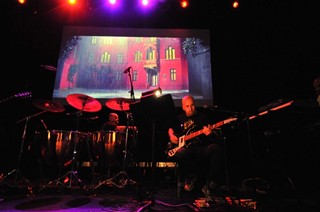 From 1pm to the stroke of 1am – when Italian horror fiends Goblin were taking their final bows after a live sonic bloodletting to Dario Argento’s 1977 silver screen colorization Suspiria – the first-year festival took its own sweeping bows on a christening few will forget. When Anselmo uttered the magic words “next year” during his second performance of the festival yesterday, the fist he shook matched many a nodding head inside Emo’s. If Housecore Horror doesn’t return to the same East Riverside axis next year, it’ll be more frightening than an Argento movie.

The third full day of metal at Housecore Horror pitted Texas versus Bayou rivals Louisiana, beginning at the “Home of the Blues” with Austin’s Dead Earth Politics. A couple dozen early risers lurched through the shadows of the downstairs as the locals took the stage looking more indie than extreme save for the drummer’s Brujeria tee and the frontman’s clean, gritty bellow. Straight metal followed, no subgenres or “core,” just rock & roll accented on its heaviest elements – rumbling bottom end, a cascade of ground-to-air riffs, and a war cry out front. H.P. Lovecraft blew a head of steam on “Madness of the Wanderer.”

A faceless, nameless (Hymns) fourpiece followed with mumbles, grumbles, and screech, but Brooklyn’s Primitive Weapons screamed appropriate warm-up for the next act. Longhair shriek David Castillo, a contorting, leaping, kneeling frontman, knew what time of day it was, too: “Pig Destroyer before 5pm? How is that supposed to work? We won’t have any faces left.”

Airplane loud, with a beater hitting his percussion so fast and hard that this drumsticks looked like fans, the group’s prog interlock of guitar, bass, and vocal expulsion went over harder than a jack-knifed truck. When Hayes, who sings like a grizzly who’s caught you with her cub, asked for a pit, bodies went flying and Pig Destroyer hit sixth gear.

Honky and Skrew bore down back to back at Emo’s in touching off the evening pyre. The former, Austin rock’s ZZ Top, tipped back their front duo’s matching hats and beards while deferring all propulsion to a drummer without a beard – subbing Melvins mainstay Dale Crover – and galloped through Southern rawk with a ramrod metal spine. “Don’t Shoot, Baby, I Love You,” “Undertaker,” and “Love to Smoke Your Weed” doffed hats to amphetamine rush and moonshine stomp as Bobby Rock and Jeff Pinkus played with all the fun and seriousness of farm overalls.

Industrial-era ATX juggernaut Skrew followed with an abbreviated 25-minute set so loud you couldn’t hear the music over the building shaking somewhere under your sternum. A sixpiece halved by guitars, the reunited locals – spearheaded by co-founder Adam Grossman – ticked off rolling typewriter beats as an almost krautrock push of string abuse answered at avalanche volume. They’ll miss departing metal mouthpiece Hunter Townsend of the previous day’s Death Will Tremble.

Looking rather healthy and dare we say chic, with should-length hair, Williams brought a hometown show of strength in the musicians lining the stage behind his band, foremost among them Phil Anselmo.

“This is our first time playing live, since, uh.”

Since the death of drummer Joey LaCaze, which prompted Housecore Horror MVP Dale Crover (“one of Joey’s favorite drummers,” bleated Williams) to pound Eyehategod to the point where unstoppable force and immovable object coagulate into liquid concrete sealing your sonic entombment. An “attempt” at the Melvins’ “Easy As It Was” capped a 40-minute set to the crowd chorus of “Joey, Joey, Joey.” A touching wake, or rather, a torched tribute.

For his grand part, the squad leader for NOLA’s Philip H. Anselmo & the Illegals was running on fumes. Vocal chords reduced to beef jerky, the Pantera hostile nevertheless spent every last shred of his larynx in providing the jackhammer lead to his solo quartet’s drum-and-bass-like hatecore. Houston’s chopped and screwed ethic as applied to extreme metallurgy, “Read Between the Lines,” “I Choke On My Existence,” and “Betrayed” pivoted on lyrical elbow-throwing like the latter’s mantra: “I’ve. Been. Betrayed.” Not even a couple of his past life hits could resurrect a flagging Anselmo and audience.

By the time Goblin appeared onstage to accompany Suspiria after an interminable, 45-minute Housecore Horror film awards ceremony, the still-plentiful survivors in the house(core) exhaled a palpable sense of relief that they’d lived to see the weekend finale. No one went home disappointed, least of all the sons of Italy, a mild-looking mix of old and young that cranked up the hysteria inside Emo’s to insane levels. Rather than Mike Oldfield’s Tubular Bells, Goblin loosened tubular effects from Claudio Simonetti and Maurizio Guarini as speared by Massimo Morante’s old-world spring-bending. Shriek of delight, all right.

Keyboardists standing, guitarists sitting under a screen dropped down above the stage (open photo gallery above), the five man crew reached unearthly crescendos that the film fought to match, making the live experience truly chilling if not downright disturbing. When the band all moaned and groaned in unison into their microphones during peak scares, it was a wonder no one bolted for the exits after 100 minutes of madness and gore.

Housecore Horror Live Shot No.2 – Day One
Repulsion, Headcrusher, Goblin, and Down – killing it