Repulsion, Headcrusher, Goblin, and Down – killing it 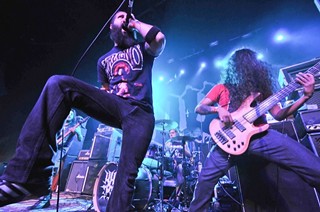 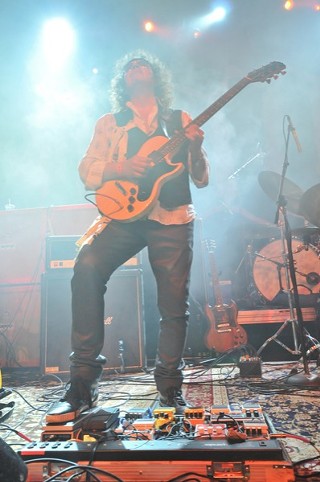 Fucking missed Pallbearer Friday because I stumbled across the entire Ratt catalog for $20 at the Austin Record Convention. There’s too much wrong with that to dwell on it. Particularly because there still remained eight and a half hours of the Housecore Horror metal line-up at Antone’s and Emo’s.

Following the deafening Little Rock quarry that is Pallbearer, grindcore pioneers Repulsion put in a rare appearance at Austin’s “Home of the Blues.” With large wall portraits of Muddy Waters, Buddy Guy, and Gary Clark Jr. looking on, the late-Eighties Flint, MI., trio started and stopped through a crowd-pleasing set of firewall blear and storm-shutter percussion.

First on at Emo’s two hours after Satan’s Cheerleaders shook their short skirts and fishnets in the Halloween gauntlet between the clubs, where a line to have Italian soundtrackers Goblin sign LPs snaked into the Latin strip between the two live music institutions, Headcrusher killed it. Getting small Austin bands on large local stages remains a sheer joy and the five brown flails of hair and death metal returned the favor with a booming, blisting 35 minutes.

Colombians in the Texas State seat?

“From the mountains of Colombia,” affirmed Gustavo “Kike” Valderrama twice. His roar (“Beware the Ides of March”), the drummer’s precision jackhammering, and the quintet’s punishing propulsion drew bodies like flies to Headcrusher’s “Wheels of Disease.” New favorite locals.

Also rising from ATX catacombs, Ancient VVisdom morphed from Satan & Garfunkel into a King Diamond mine. Where the acoustic doom of the locals’ 2011 debut and 2013 follow-up tingle and quiver with a monastic mass of metallic folk, inside the East Riverside hall they reared up electric on their hind hooves. Looking like Graham Bonnet in shades, short-cropped hair, and leather, lead Ancient Nathan Opposition glowered like early Judas Priest in jumping back to their debut on Lucifugue “The Opposition.”

Texan metal pillar Bruce Corbitt in Arlington’s Warbeast next clawed at the corners of Emo’s sky-high ceiling with a canon vocal range and real rage. The Rigor Mortis singer peeled paint while RM bandmate and bassist Casey Orr shook foundations, and even if the other three thrashed somewhat generic, their ear-splitting thunder couldn’t help but destroy your face. No doubt their Housecore Records benefactor lurked in the wings somewhere grinning like a maniac.

Lunatics got theirs afterward when Goblin materialized from the recesses of cult and time. The 40-year-old Roman artifact, on its first U.S. tour, began with “ciao, Austin” and between that and “grazie!” 45 minutes later, Seventies prog rock and Seventies silver screen splatter converged. Augmented by a new, younger rhythm section, the core trio of key men Maurizio Guarini and Claudio Simponetti, and bandleader guitarist Massimo Morante (see photo gallery), blazed through an Italian version of Emerson, Lake & Palmer one minute, then crossed Mike Oldfield’s Tubular Bells with Bernard Herrmann soundtracking Alfred Hitchcock the next.

Or was that John Carpenter and Phantom of the Opera? A zombie Rush? All of the above, from Goblin’s Roller LP to trademark film themes for Suspiria and Profondo Rosso. Catch the sons of Italy one last time at Emo’s on Sunday, recreating their score to the former film in all its bloody glory.

Finally, Housecore Horror dome Philip H. Anselmo took the stage with Down as perhaps the only man/band that could follow Goblin. The New Orleans supergroup, in its first take-down with local Honky shredder Bobby Rock, convulsed for 75 minutes, hearkening back to Pantera’s last local earthquake at the Austin Music Hall in 1997. Emo’s today resembles that long-gone metal box – square rooms: all sight lines and no-brainer acoustics – and in Down’s thrashing Southern sludge (“Eyes of the South”) lurched and barked both new sea sickness (“Witchtripper”) and Dimebag Darrell dedications (“Lifer”).

They could do no wrong, really, from leviathan stomps (“New Orleans is a Dying Whore”) to old-school gallops (“Losing All”). And modern metal’s Boss? Grade A aggro badass and honorary Texan – benevolent, humble, humorous. 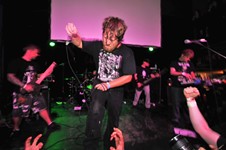