When Suzy Bogguss titled her recent CD American Folk Songbook, she wasn’t kidding. The Illinois-born country singer-songwriter actually used her grade school songbook as inspiration for the recording and show she’ll be performing at One World Theatre on Thursday, Oct. 17.

Bogguss’ fine ear for a good song has paid off handsomely throughout her career. She’s breathed new life into Patsy Montana’s “I Wanna Be a Cowboy’s Sweetheart” and Judy Collins’ “Someday Soon,” so no surprise the chestnuts she handpicked for American Folk Songbook sound fresh.

Bogguss has kept her Texas connection tight over the years, appearing on the Jerry Jeff Walker-hosted Texas Connection in the early Nineties as well as on Austin City Limits. She co-produced her 2003 album Swing with Ray Benson and appeared on 2011’s Guy Clark tribute This One’s for Him.

Austin Chronicle: I’m guessing you’ve sung many of these songs all your life. What did you find out about yourself in revisiting these treasures?

Suzy Bogguss: More like back to my roots. I was a totally happy kid when I was in music class singing these wonderful songs. Even the history lesson that went along with them!

AC: I’m someone for whom song sequence matters, so why did you pick “Shady Grove” to open the album? Are you also familiar with its English folk predecessor, “Matty Groves”?

SB: I too love the “Shady Grove” story and the “Maddy Groves” melody. I wanted to establish the simplicity of the album with the first four songs.

AC: Did you pick a song for one reason and then discover something different about it to love when you recorded it?

SB: There was a lot of research going on while we were recording. I must admit that “Wildwood Flower” took a sassier stance when I heard the original poem written by Maude Irving.

AC: Some of these older songs have many versions, variations, numerous verses, etc. How did you choose which ones to use?

SB: I really stayed true to my first impulse, which was to do the songs I remembered from my youth. Those were the renditions I sought out. I think I had the most trouble with “All the Pretty Little Horses” because I knew so many versions of that one. 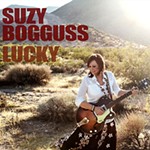