The Rain Can't Stop the Music 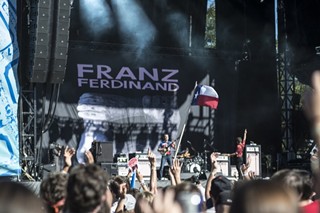 Like rain would stop the Scots. Franz Ferdinand among the bands making alternative ACL plans (Photo by Sandy Carson)

What happens when a festival's rained out? Bands find somewhere else to play. If you still want to catch the cancelled acts from today's Austin City Limits Festival lineup, they're already putting on last-minute fill-in shows tonight.

UPDATE: In a late addition, Noah and the Whale managed to find an 88 key piano and will be at Empire Control Room and Garage, 604 E. Seventh, 9pm door. Free, all ages, and this is a HAAM/Austin Music People fundraiser.

Also add Lance Herbstrong to the list of performers fighting through. They'll be at Amped Austin (300 E. Sixth) from 9pm.

Franz Ferdinand singer Alex Kapranos just tweeted: "Alright, #Austin. We have a gig to replace #ACL. It's at the ACL-Live venue: http://acl-live.com/venue. Hopefully VERY special guests too."
UPDATE: Keep following @alkapranos on Twitter, because there seems to be a question mark over whether this is happening.
SECOND UPDATE: ACL is off, Infest is in! According to Kapranos, the Glaswegians will be at the former Antone's (215 W. Fifth), doors 7pm. And, if you're following his Twitter feed, there's no love lost with ACL-Live.

The Mowgli's will be doing a special pop-up show/fundraiser for Austin's homeless at East Seventh and Neches at 4pm. They suggest you "bring anything that someone might need!"

UPDATE: The Mowgli's are killing it. Aside from their ninja charity fundraiser, they also busked for the line at the rumored Atoms for Peace gig at ACL-Live, and now have confirmed a free show with LA quartet Smallpools at Lamberts (401 W. Second), doors 9pm.

UPDATE: Looks like the Lone Bellow are pulling double duty. If you can't get to One to One, they're putting on a second show, this time with Red Baraat at the Belmont (305 W. Sixth) doors 8pm.

UPDATE: And now we can upgrade from rumor to official. Atoms for Peace (aka the reason Franz Ferdinand are playing Infest) will be at ACL-Live at the W (210 Willie Nelson Blvd.), doors 9pm, show 10pm. Tickets $10.

Hear about any more shows? Tweet us at @Austinchronicle, be our Facebook friend, or hit the comments section below. 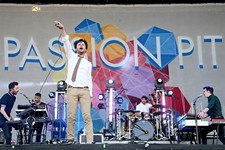