ACL Live Shot (Second Weekend): Thao & the Get Down Stay Down 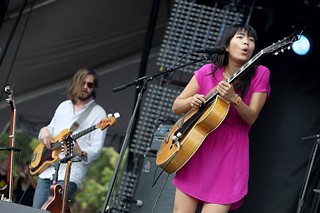 Wendy Davis, get a load of Thao Nguyen (right) (by Gary Miller)

From start to finish, Thao & the Get Down Stay Down’s Friday afternoon ACL Fest performance was a sex-positive post-feminist manifesto. If Barry White were a Vietnamese folk-rocker with a women’s studies degree, this would be the set-list he’d deliver.

Thao Nguyen got the hit out of the way early, opening with “Body,” a track that argues for considering a woman as more than just “a body in the bed.” A good portion of the set was dedicated to tracks from this year’s We the Common, a politically engaged album inspired by Nguyen’s work with female prisoners in the California penal system, Occupy Oakland, and a desire to ground herself in the world.

Songs like “Holy Roller” seethe with a barely constrained sexuality, while “Kindness Be Conceived” imagines a pastoral paradise populated by artsy women. Introducing “Swimming Pools,” which was written for her mother and grandmother, Nguyen announced, “I’d like to dedicate this song to Wendy Davis. I was tweeting as hard as I could to get her here, but I guess it didn’t work.”

Nguyen and her band bookended the set with more sexytime music. “When We Swam” exhorted “bring your hips to me,” then, after unleashing her inner rock beast – interspersed with friendly flirtation with the audience – Nguyen ended “Move” with a lascivious rap, dropped the mic, and stalked offstage.

Adrenaline or a power play? Perhaps a reminder that Nguyen was the one calling the shots.

More Thao & the Get Down Stay Down