Coming into the family name and legacy 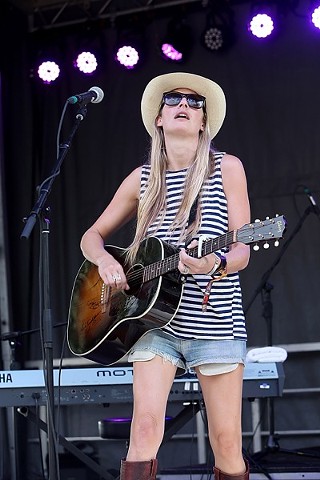 There’s a family resemblance, no? (by Gary Miller)

Holly Williams debuted at ACL Fest appearance nearly a decade ago, supporting an introductory 2004 album and the high expectations of a legacy flowing from her family name, inherited from grandfather Hank and father Hank Jr. A car crash two years later nearly ended her music career just as it had begun.

Williams’ third album The Highway, not only cements a renewed commitment to music, but also further establishes another branch of sound sprouting from the family tree. Her songs prove more deeply personal and character driven, with a finer polish even as they retain a touch of barbed edge.

Taking the BMI stage in cut-off shorts and knee-high boots, the 32-year-old songwriter opened with new cuts “Railroads” and “Gone Away From Me.” Her gleaming Gibson guitar sought to establish a different lineage of musical influence than the one she was born into, the instrument bearing fresh autographs from Kris Kristofferson, Guy Clark, John Prine, and Jackson Browne.

Both “Drinkin’” and “The Highway” delivered rousing country anthems, offsetting the emotional pull of “Happy,” “Giving Up,” and “Let You Go,” with her trio that included husband Chris Coleman. Her poignant take on Blaze Foley’s “Clay Pigeons” won local favor even as Prine’s “Angel From Montgomery” faltered. Closer “Waiting on June” demonstrated Williams’ inherent talent as a songwriter.

In another 20 years when her guitar has worn away its polish and the array of scrawled names has faded, it’s easy to imagine that Holly Williams will be equally worthy of them.