Singer proves ‘Love Is Only Everything’

Charles Walker is not as nimble or as desperate as Charles Bradley. He’s not as gritty or as sexual as his North Carolina counterpart Lee Fields. His strength lies in his refined voice. Fronting Nashville soul burners the Dynamites, that’s more than enough.

The Dynamites, fronted by guitarist Bill Elder, drop Daptone juice with a slight Stax nod, imploring the too-small crowd to “help make the world a funkier place tonight.” Their introduction went on for a few minutes and cut through each of Walker’s many underground classics from a 45-year career of the longtime Music City soul man.

The 73-year-old Walker inched onto the BMI stage just around sundown in a black suit, white button-down, and a black tie, his hair cut into a flattop, and his band – two horns, a drummer, guitarist, and bassist – strapped behind him. They chugged as he danced, pulling from this year’s dyn-o-mite Love Is Only Everything for a crowd that, as one bystander suggested, grooved more than any other all day.

Walker couldn’t have cared less about the modesty of the Dynamites’ danceathon. Instead, he trudged on, digging through “I Just Want You to Know” and Love’s title track before a massive rearrangement of Al Kooper’s “I Love You More Than You’ll Ever Know.”

“I’m not trying to be any kind of man,” pleaded Walker.

Too late. Soul brother is that dude. 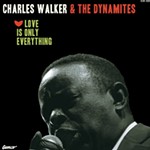