Flyin’ high and fast at a sold-out Moody Theater 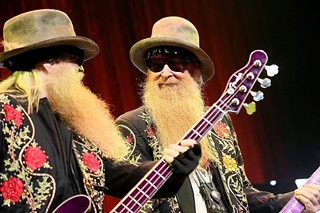 If ZZ Top’s explosive set at the Moody Theater Wednesday night grazed 75 minutes, it was by mere seconds only. Shorter but more combustive than the Houston trio’s performance at the Majestic in San Antonio last November – a venue the band revisited Tuesday – their Pompeiian blues up inside the cylindrical intimacy of the Moody felt like a lap dance.

As lightning fast as the show was, it mushroomed with atomic density and equal tonnage. Immediate opener “Under Pressure” blitzkrieged as heavy and inevitable as crude oil, Billy Gibbons’ first oozing verse met by Dusty Hill’s piquant punctuation as churned in full-on tractor mode by John Deere drummer Frank Beard – the one without the beard.

In matching Mariachi jackets, purple guitars, and sharp gray hats, the dual frontbeards danced like the skulls on Beard’s bass drums while pumping out the molten hit from 1983’s 10-million-seller Eliminator. There was no putting the genie back in the bottle after that.

Hill and Gibbons’ perfect synchronization as they stepped sideways to their muffler mic stands for the first “have mercy” of “Waiting for the Bus” illustrated their wit and bonhomie in a single step the same way it played out all evening – with schoolboy grins at each other. This ain’t no Jagger/Richards blood feud. It’s the Louvins, Carters, and Stanleys: deep, abiding family and brotherhood. Angus and Malcolm Young.

Birthed in Texas, ZZ Top embody it like no other rock & roll act. They’re the beat of the heat – hot, heavy, omnipresent. Boots, hats, cold beer. While rummaging through his pocket for a list of people to thank, Gibbons pulled out a joint.

“Give the drummer some,” waved Gibbons at Beard, and with that, another Eliminator decimated. Watching the guitarist play the granite riff to “Gimme All Your Loving” on the top strings then apply a stinging refrain by plucking the low wires and letting it ring defined poetry in motion. And never did someone look so unconcerned about reproducing a huge hit and yet crank it out as smooth as a South Texas oil derrick.

And the tones he got, sometimes with just a thumb on his huge, perfectly manicured hands, were spine-tingling. They made the LP version of “Gimme All Your Loving” sound like a tin can telephone. Its MTV video played on the screens behind Gibbons and Hill.

Then again, “Pincushion” came off sooo gravelly it might as well have been a rock slide. Bury us, boys. (I mean tres hombres.) Ask not which backstage queen will be tonight’s “Pincushion.” We the audience are the “Pincushion.”

“Alright Austin, Texas,” said Gibbons. “We having a good time tonight? We’ve been here, there, everywhere, but it’s always great to be in the Lone Star State.”

He always says that, but it’s a greatest hit by now, same as the lead single off last year’s 15th studio album La Futura, “I Gotsta Get Paid,” which found Hill scrubbing his four strings with the palm of his hand while interspersing quick plucks. Bass ballet, pure wallop. Hill’s high insistence “I Gotsta Get Paid” not only proved gutter-punk convincing, it spotlighted the Moody’s pristine acoustics. You could finally hear the nuance in the Top, and if it all sounded like sonic lava to the casual headbanger, no doom metal band could ever emit such thick, opiate sludge.

“Another new one,” nodded Gibbons, and “Flyin’ High,” with its vertiginous video, even had Beard emoting into his head mic. La Futura’s “Tush” rebooty, “Chartreuse,” borders on a brand new set staple, but “Certified Blues” from 1971 debut ZZ Top’s First Album bowed as a surprise of the first order, Gibbons playing one-handed before the band ripped into Jimi Hendrix’s “Foxy Lady.”

Slab after slab – hits, deep cuts, three-chord barrages – ZZ Top made you drunk on their firewater. Dusty Hill’s bullfrog punctuation on “Sharp Dressed Man” and the wall-to-wall white shag (mink, rabbit fur?) on his and Gibbons’ “Legs” guitars left audio-visual markers as indelible as the latter’s high vocal range on the latter song, also the set closer at 55 minutes.

Plucking a riff straight out of rock & roll’s DNA, “La Grange” corrected something that still makes no sense in the aging genre. If you’ve got a Mount Rushmore-sized riff, don’t just ride it for four FM minutes. Buckle in and tame it until the storm passes, which is just what ZZ Top did, elongating it into an epic “Voodoo Child”-like mountain-mover.

Hammer of the Gods, all the way. Take a bow, hombres.

“Waiting for the Bus”

“Gimme All Your Loving”

“I Gotsta Get Paid”

“My Head’s in Mississippi” 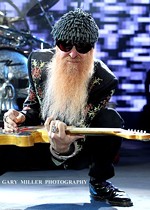