Reunited with blood fury and dedicated to Brent Grulke 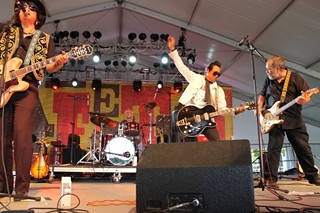 KUTX’s Jeff McCord introduced the Troobs (as loyal fans call them) before their ACL Fest set last Saturday, calling them one “of the best rock & roll bands” he’d ever seen. Many critics declared Austin’s legendary True Believers as one of the must-see acts at Zilker Park.

For me it was exhilarating, watching the show with fellow second genners Io Hickman and Marlon Sexton. It was the second time I’d seen the Troobs play. The first was at the show that kickstarted this reunion, last year’s Grulke Fest.

I couldn’t believe that was my dad, Jon Dee Graham, up onstage playing with such powerful fury alongside Javier and Alejandro Escovdeo – a rock & roll wall of three guitars on fire. As KUTX’s Kevin Connor said, “They’re playing chainsaws.” The show was capped with an explosion of blood as Rey Washam’s thumbs both burst open thrashing his drums. The crowd couldn’t stop grooving, bouncing, a pulse grounded by bassist Denny DeGorio.

McCord says the Troobs are “a true force of nature and one of the greatest things to ever come out of Austin.” Earlier this year, the True Believers released an EP, which included a song about Grulke called “Dedication.” My dad wrote the lyrics and Alejandro sings. The late South by Southwest Creative Director had been the band’s road manager, sound man, confidant, and engineer.

Brent Grulke was a True Believer in every way.

Austin Chronicle: What did Brent mean to the True Believers?

Jon Dee Graham: Brent was a super fan of music, not just for us, but any number of bands.

AC: Can we go over the lyrics for the song “Dedication”?

JDG: I don’t go over my songs with anyone.

AC: Let’s just go over some lines from the song anyway. Start with, “We were kind of soldiers and it was kind of a like a war.”

AC: “We don’t leave our fallen on the field.”

JDG: It’s like the Marines. If one of your guys goes down, even if there’s heavy artillery fire, somebody goes out and brings the body back. You don’t leave your brother on the field. It was like that. Getting back together, playing again, we were going to get Brent and bring him back. Brent was tireless for us. He was always there for us. And he did if for a lot of other bands too. When it came to rock & roll, he was all in.

AC: “At the Holiday Inn in your underwear.”

JDG: That was from a photo that Spin magazine ran. It was a snapshot of this scene: We were staying at the Holiday Inn. It was time to go. Al and I went to wake up Javier, Denny, and Brent. We opened the door to Brent standing on the bed in bright red underwear.

AC: “At the Fullerton Ballroom standing on your chair.”

JDG: In my mind, I remembered it that way, but it was actually the Fender Ballroom. We were opening for the Replacements. And we were all fans, but Brent was insane for them. After we played we were backstage, but Brent wanted a better view so he was standing on this chair with both arms in the air screaming. That was back when we would go on endless tours.

AC: “In an Oklahoma basement, there were gypsies.”

JDG: One of the places we used to play a lot was the Bowery in Oklahoma City. We often played with our buddy band in that city called the Fortune Tellers. There were these two Greek brothers who were from an actual Romany family. It was crazy when we got together. I have this memory of it snowing and all of us standing in the middle of the street in Oklahoma City at 3am singing the old blues song “Walk the Dog” with them.

AC: One year after Brent has passed and the Believers are still playing.

JDG: It sounds selfish, but it’s been a beautiful gift that Brent gave us. Who would’ve thought that the Believers would ever be in the studio again together or playing shows like ACL. We’ve gotten to play together in the band that we used to be, but we’re better than we ever were before. 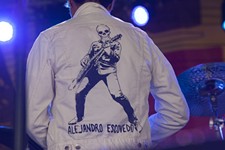 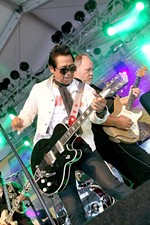