Matt Berninger and the cloud of sulfur the National summoned on Sunday, 10.6.13 (by Shelley Hiam)

The National delivers catharsis in the most traditional sense: a misery-loves-company, populist uprising of release.

Slinking around the stage, clutching himself in the terror and dread of his own angst, Matt Berninger takes on the gripping anxiety of our age so that it might be contained and dissolved, and crowds love him for it.

Dramatic yet deployed to perfection, the National have managed to maintain the intensity of emotional strife and uncertainty even as the band matures and rounds well into its second decade with their sixth LP, this year’s Trouble Will Find Me. The Brooklyn quintet, supplemented by a duo of horns, opened with new cuts “I Should Live in Salt” and “Don’t Swallow the Cap” before building into the maddening, thick hum of “Bloodbuzz Ohio,” which proved aggressive against the lit backscreen splattered in red.

Berninger, in suit and tie and eyes hidden behind sunglasses as the shafts of sunset streaked down behind him, straddled the mic stand against the enveloping percussion of “Afraid of Everyone” and epic rise to “Squalor Victoria.” New tunes “Sea of Love,” “I Need My Girl,” and “This Is the Last Time” all melded seamlessly into the National’s catalog, and while they added little unexpected variation to their tension and release formula, save for the screaming rage from Alligator’s “Abel,” the bitter bite of “Fake Empire” still resonated.

In accordance, “Mr. November” emerged blisteringly anthemic as Berninger plowed his way through the festival crowd before closing with “Terrible Love.” The National manage to make misery magnificent. 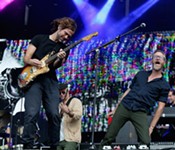 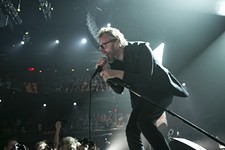