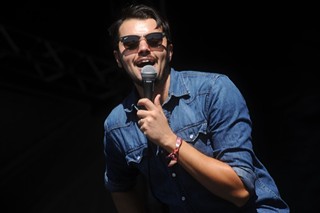 Aaron Behrens started at the bottom. Now he’s back. Austin’s rhinestone cowboy capped an ACL Fest trifecta with Ghostland Observatory in 2010, aided by the UT drum line and a laser spectacular.

The local DIY duo defied all odds, taking minimalist electro-pop to Lollapalooza and Lexus commercials years before the EDM gold rush. The irony of his new project landing on ACL Sunday’s early-morning-hangover slot wasn’t lost on the singer.

“It ain’t exactly midnight, but hopefully we can get you there,” he offered before Soundcloud single “Day and Night,” the lone track to the band’s credit. You can’t fault him for trying.

Behrens still has night moves like Jagger, but the look and context’s changed, and mostly for the better. With the Midnight Stroll, anchored by perennially underrated guitarist Jonas Wilson (Lomita, White White Lights), Behrens swapped glitchy raves for brown-sugar R&B that pulled from all corners of the classic rock canon. One of the heavier numbers borrowed as much from Led Zeppelin’s “Since I’ve Been Loving You” as Robert Plant did from Moby Grape.

Of course, Behrens isn’t known as a songwriter – GLO’s catalog didn’t exactly lend itself to unplugged sets – but he’s got a lot to work with here, reflecting back on his success with a sense of wonder and lonely, burned-out detachment. One of the most commanding songs was actually performed at a standstill: an acoustic number, presumably titled “Magic Man,” that traded high-pitched shrieks for a convincing Buddy Holly hiccup.

It takes rare audacity to step out of the spotlight and try something completely new. Behrens has the conviction to pull it off, no matter the odds. 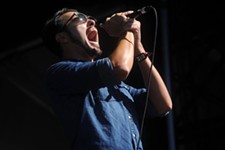