Dubbed “the new protocol of soul,” Vintage Trouble has been on the verge of a breakthrough for a couple of years. Given Saturday’s visceral reaction from ACL, that status won’t remain valid for long.

The Hollywood quartet pumped itself and the audience up with the brief “High Times (They Are Coming),” its gospel fervor forcing feet to move and hearts to beat faster. The spectacular “Blues Hand Me Down” hit home hardest with the sight of sharp-dressed singer Ty Taylor spinning like a top and spiraling his mic cable as guitarist Nalle Colt rocked confidently and the rhythm section shook the groove into the ground.

Taylor knew it, too, and rounded up a sense of audience participation for nearly every song afterward. A cappella call-and-response during the funky yet tender “Nancy Lee” caught immediate fire, while the singer’s command to “1-2-3, push your pelvis with me!” during the wild single “Pelvis Pusher” cranked the heat.

Socially conscious ballad “Not Alright By Me,” featuring local guest singer Patrice Pike, turned VT’s flame down to a simmer, but Colt broke out his nasty slide for the explosive “Run Like the River,” during which Taylor joined the crowd. There was no containing this inferno. The Wilson Pickett-soaked “Strike Your Light” practically melted the stage.

Later, Taylor channeled his inner Sam Cooke on closing ballad “Run Outta You,” enticing the audience to sing the chorus after Colt’s frenzied guitar solo and sending the musicians offstage one-by-one in a gentle cool down. Not since the Bellrays or even Cowboy Mouth has a band so quickly and easily placed the people in the palm of its hand. Vintage Trouble’s gospel power has nothing to do with religion. It’s the physical manifestation of collective soul. 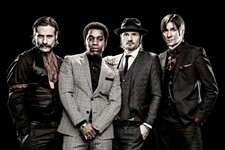