They’re what a rock & roll act is supposed to be, right? 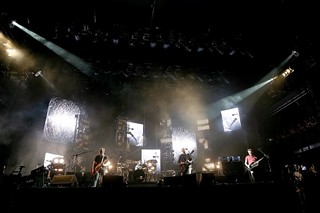 Objects may appear MUCH smaller live: Kings of Leon (by Gary Miller)

Despite their enormous popularity, there’s nothing captivating about Kings of Leon. The band’s capable of some nice recorded moments, but the Nashville foursome falls flat live.

When KoL began, they were marketed as a Southern Strokes of sorts, and much like that NYC trust fund “garage punk” band, the Followill clan does certain things certain ways because, “Well, isn’t that what a rock band is supposed to do?”

Live, that means you hear songs that sound like Caleb Followill heard a U2 album and thought, “Oh, I should write something like that.” Or heard a Radiohead disc, or a Pink Floyd LP, or some Rolling Stones vinyl, and said, “Hey, maybe I should do something like that?” What you see on the giant video screens looks very small indeed: three brothers and a cousin trying to get through the songs, not really trying to entertain or engage the audience. That’s what the light show is for anyway, right?

Maybe I just don’t get it. Perhaps I’m not their demographic. I certainly saw a lot of shapely young females shaking it to the Kings’ admittedly stadium-sized rhythms, and drunk young frat boys pumping fists. All I could think was, “No, you had to have seen the Jon Spencer Blues Explosion last night to do that!”

Kings Of Leon are more like Beatlemania: Not rock & roll, but an incredible simulation. 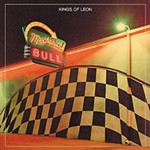 Kings of Leon
Only by the Night (Record Review)