Will Sheff’s local crew gets bloody

Will Sheff (r) and Lauren Gurgiolo (by John Anderson)

A primary test for each new Okkervil River album is how well the songs mesh live with their previous material. How the worlds that Will Sheff spins so completely with each LP collide and expand upon each other.

Brandishing the freshly released The Silver Gymnasium, Sheff’s most personal album in its recall of his small New Hampshire hometown circa 1986, Okkervil’s already cathartic catalog was recast with an edge that seemed to cut even more closely to the bone.

Commencing with album openers “It Was My Season” and “On a Balcony” made the shift into the dark throb of Black Sheep Boy’s “For Real” all the more harrowing. Sheff’s understated declaration, “Tonight I thirst for real blood,” struck more forcefully against Gymnasium’s idyllic, lost-innocence themes.

Likewise, the anthemic sweep of The Stage Names' “John Allyn Smith Sails” rallied the Honda stage crowd into the melodic swoon of “Where the Spirit Left Us,” only to be crushed under the muffled roar and assault of “The Valley” and then realigned with the bursting Talking Heads-ish pop of “Stay Young.”

The setlist struggled to find cohesion, and yet in the sharp punches of “Our Life Is Not a Movie or Maybe” and the classic rock pull of “Down Down the Deep River,” the stylistic barrage seemed to aptly evoke a flailing against its own history, Sheff’s howl caught between the lost and remembered dredges that nonetheless closed upon the epic release of “Unless It’s Kicks.” 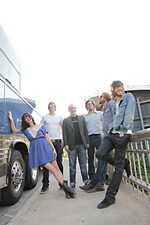