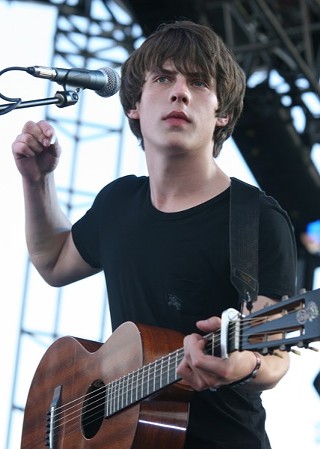 My my, hey hey – Jake Bugg (by Shelley Hiam)

When last in Austin for South by Southwest, 19-year-old Jake Bugg boasted a shockingly strong debut LP and a stage presence that needed some work.

Hardly gregarious on Friday, the young Brit was more confident and relaxed, locked in tighter with his rhythm section and enjoying a larger, more engaged crowd than at his last local appearance.

He also came to the table with new songs and a more rocking direction – the result of recent work with classic rock-loving Rick Rubin, perhaps? The tremolo-enhanced blues of “Ballad of Mr. Jones,” near-punk blaze of “What Doesn’t Kill You,” and a moody electric cover of Neil Young’s “My My, Hey Hey” point to new juice running through the youngster’s veins.

Bugg’s truest talent still rests on the influence of a certain Man in Black, via “Trouble Town,” “Country Song,” and the rockabilly-flavored “Slumville Sunrise.” Who knew that the most potent inheritor of the Tennessee Three’s distinctive boom-chicka-boom would be a British teenager from council housing?

He’s additionally adept at ironically world-weary observations, like “Seen It All” and melancholy balladry like “Broken.” Ultimately, his biggest British hits gave him the most mileage. The show-closing “Lightning Bolt” elicited plenty of cheers, while the anthemic “Two Fingers” left an impression with its defiant honesty and rootsy hook.

Bugg may never be the star in the States that he is in the UK, but his ACL Fest set made him far more friends than he’s enjoyed here previously.