I bet you look good on the dance floor if I could see you through these glasses: chief Monkey Alex Turner (by John Anderson)

“How does it feel to be watching the Arctic Monkeys with such a beautiful sunset behind you?” chief simian Alex Turner shouted toward the end of his UK quartet’s performance Friday night. Arctic Monkeys know how to work a festival crowd.

It’s not Turner shouting things like, “How ya doin’ Texas?” or even drummer Matt Helders wearing a Casino El Camino t-shirt on the huge TV screens. It has to do with the musical shift the bandmates have made since they worked with Queen of the Stone Age Josh Homme at his Joshua Tree studio, a collaboration that first began with 2008’s Humbug.

Tempos slow down to fill big spaces like Zilker Park. Music gets heavier, gestures grow larger. Thus, tracks from latest release AM, like “Why’d You Only Call Me When You’re High?”, go down better than the Arctic Monkeys’ old frantic punk-funk, although a reprise of breakthrough hit “I Bet You Look Good on the Dancefloor” got the most ecstatic response.

Still, after Arctic Monkeys finished and just over the hill, a familiar pharmacological rant was fired off: “Nicotine, Valium, Vicodin, marijuana, ecstasy, and alcohol.” In seven words, Josh Homme proved to Arctic Monkeys fans who rules the stoner rock roost. 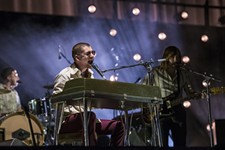 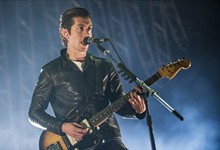