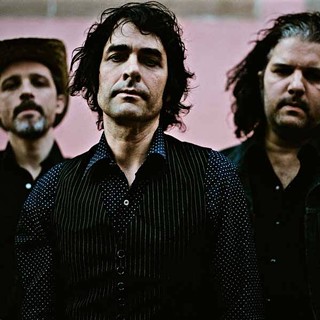 It’s been a long time since we heard the primal blues-punk of the Jon Spencer Blues Explosion. Why? For one, the New Hampshire-born namesake, now 48, was trying other projects.

Last year’s Meat & Bone finally broke the Explosion’s silence. Now, Spencer and his trio plays ACL Fest on consecutive Fridays. We caught up with Spencer between recording sessions for a young band from New York.

Austin Chronicle: It’s a pleasant surprise to see the Blues Explosion back together. You went on a hiatus for a while to do other things, right?

Jon Spencer: It was about three years where we didn’t play at all, but it’s been eight years since a studio album. We released Damage in 2004; Meat & Bone came out last year. But you’re right: At least for me, the reason I wanted to [take a break from JSBX] was because I wanted to do different kinds of music. Mainly, I wanted to concentrate on Heavy Trash, the project that I’ve got with my friend Matt Verta Ray.

AC: That one’s a little bit more rockabilly than the Blues Explosion.

JS: Pussy Galore was a long time ago. That was back in the Eighties, and there was a year between Pussy Galore and the Blues Explosion. I kicked around a little bit, played with a couple of different bands. I played with the Gibson Brothers. And during that time, I loosened up a little, maybe? And I discovered that rock & roll wasn’t this terrible, horrible thing; that it wasn’t totally bankrupt. There’s a lot of good still there, and there’s a lot of good that can be found. You just have to search for it.

AC: You put yourself right in that lineage of the Gun Club, and it could be argued even Johnny Thunders, with the idea that the blues could meld with punk rock.

JS: People talk about it like it’s a new thing, that it’s “blues punk” or whatever you want to call it. But you’re right: There’s definitely a longer history there. And it’s not just white kids, either. Just look at someone like Hound Dog Taylor. You can even look at someone like Muddy Waters! That’s a kind of blues punk. I never thought there was much of a difference – that many miles between blues music and punk rock.

AC: It’s been great to see the Blues Explosion become an influence over time. Honestly, Jack White has certainly taken your approach to the bank. And there have been bands in recent years like the Jim Jones Revue that have clearly been influenced by you guys.

JS: I always thought the Blues Explosion was a great band, and I still think they’re a great band. I think what we do is very special. I can’t speak to any of that other stuff, but I will say we’re a great band.

AC: How does it feel, compared to back in the Nineties, doing shows these days?

JS: I’m a lot older. My body feels different, that’s for sure. I think the most important thing is that my love of it, the passion, is unabated. That’s unchanged. We still enjoy doing this, and that’s why we’re doing it. It still feels good, so we’re gonna keep doing it. Yeah, there’s shifts in the audiences, and the crowds have changed a little bit. But we’re still doing what we’ve always done: We’re playing rock & roll and putting on a rock & roll show. I think people’s desire to get together and shout and stomp their feet and share something like that, that will never change.

AC: When you’re writing lyrics, is it stream of consciousness, or are you sitting down and thinking these words through?

JS: It’s a mixture of both. When the song comes, it usually comes all at once: the music and the lyrics, or at least the kernel of the idea. There’s a period of editing, refining, and polishing. I’ve written songs all sorts of different ways, but usually there’s some phase of.... It’s like writing a paper for school. You’ve got to go through drafts sometimes.

AC: So, that college education did pay off!

JS: Yes, all those thousands of dollars. They’ve served me well. The words aren’t something I toss off casually. They’re carefully written, and I can understand why some people have trouble understanding what I’m singing about or the words coming out of my mouth. For me, the spirit is there, and the trust is there, and that’s enough. I can’t say that I’ve understood every word that Mick Jagger has ever sung, or that Iggy Pop has sung, or Howlin’ Wolf.

AC: Is another album in the works anytime soon?

JS: I don’t know. We’ve been writing new songs. We had a session out in Arizona with an old friend, Jim Waters. That was at the beginning of the summer, so we’ve got a bunch of new songs, and we’ve already recorded some of them. We don’t have a hard, fast plan for it, but we’re definitely starting to think about it.

AC: Do you have anything in particular planned to throw on the Austin audience this time around?

JS: I don’t know, like chicken wings or something? No, we don’t plan things out. We’ve never used a set-list. We like to try to be ready for anything: ready for what the crowd wants, or ready for whatever we think the crowd wants. We’re gonna try our hardest to put on a great show. I think there’ll be a few things the people down there haven’t heard us do before. But it’s still the basic, sweaty rock & roll revival. 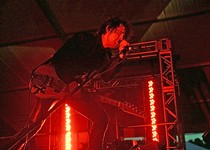 ACL Live Shot: Pacha Massive, Blind Boys of Alabama, JD McPherson, and Jon Spencer Blues Explosion
An afternoon in the Gospel Tent no one could follow