Thorn in My Pride

The Black Crowes take the Moody Theater back to 1970

Jesus Christ, is that Chris Robinson? It is, with the Black Crowes at the Moody Theater, 9.28.13 (by Gary Miller)

Apropos of the Duane Allman Skydog collection, its producer Bill Levenson told me another great box set might center on 1970. That conversation came to mind as I witnessed the Black Crowes positively roar for more than two hours on Saturday night at the Moody.

When we spoke in July, the famed archivist mentioned some of the artists already collected. In 2012, he’d won a bookend Grammy to the prize he took home for Eric Clapton’s Crossroads box in 1988, this one for his work on the deluxe edition of Derek & Dominos’ Layla and Other Assorted Love Songs. That meant Clapton as well as Delaney & Bonnie and the Joe Cocker/Leon Russell congregation known as Mad Dogs & Englishmen were shoe-ins.

In fact, 1970 was a fertile year. Rock blossomed with extended jams and classical influences and thus morphed into progressive rock. Jazz, meanwhile, underwent an electric transformation branded as fusion. In the South, long-haired musicians were rocking blues into something else entirely. The Black Crowes embody all of it.

The sextet, now more that 20 years off and on, brought 1970 to life with a vigor that comes from experience as well as a love for a style that never grows old to ears accustomed to hearing country soul played as loud and as long as necessary. Dubbed Lay Down with Number 13, this tour follows a two-year hiatus, which accounted for this show being sold out of months.

It also marked the first time they appeared locally with new guitarist Jackie Greene, known as a solo act as well as for his work with Phil Lesh and Bob Weir of the Grateful Dead. Greene fit in perfectly, his solos never extending into noodling, and the occasional interaction with co-bandleader Rich Robinson’s guitar sounding both sharp and balanced. The other Robinson – frontman Chris Robinson – didn’t manage more than the occasional thank you, but his stage presence remains undeniable as he danced in circles, waved a tambourine, and wailed with a seemingly boundless amount of feeling.

Without a new album, the band reached deep into its catalog for a fan-pleasing set that went back to 1994 for the Memphis-styled soul of “She Gave Good Sunflower” from Amorica, 1996 for the hard riffs of Three Snakes and a Charm’s “Nebakanezer,” and sugar-coated ballad “Girl from a Pawn Shop,” with a blustery solo from Greene. Towards the end of the show, the double punch of “She Talks to Angels” and “Thorn in My Pride” was a seamless excursion that brought out a touch of the group’s gospel side.

An encore that included the Rolling Stones’ “Happy” from 1972 revved up an already delirious crowd and confirmed my initial thoughts. Sure, they’ve been compared to the Stones to the point of cliché, but on Saturday, the Black Crowes’ boozy boogie reanimated the era like a Faces reunion. 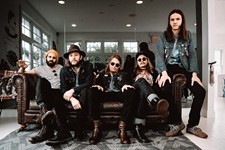 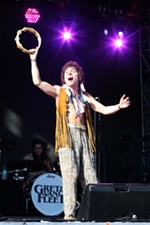