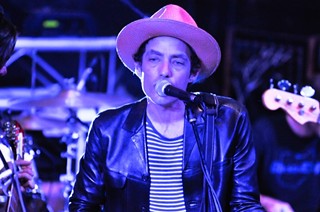 The presence of those four proved only a thin slice of wonder that ended up being Petty Fest, a two-hour “Breakdown” of the Florida legend’s almost 40-year-old catalog. The 27-song set, backed by the Cabin Down Below, an NYC cover act named for the Petty song off 1994’s Wildflowers, navigated some of gator’s best known material. Jones covered “Time to Move On” and played Stevie Nicks to Dylan’s Petty on a fiery “Stop Draggin’ My Heart Around,” while Isbell teamed with bandmate, wife, and Lubbock native Amanda Shires on “I Won’t Back Down” and “You Got Lucky.”

Names lower on the marquee ended up leaving as much of an impression as the ones on top. Adriel Denae held her own alongside Jones on “Wildflowers,” Butch Walker got high energy on “Even the Losers” and “The Waiting,” and Nashville fireball Ruby Amanfu lit up local guitar hero Charlie Sexton on a rousing rendition of “Honey Bee.” She returned to duet with Willie Nelson’s kid Lukas on “Don’t Come Around Here No More” and played the role of Last Waltz-era Mavis Staples on all-for-one closer “Free Fallin’.”

Perhaps most impressive was the way Austin’s own held its own. Whiskey Sisters stormed “You Wreck Me,” Ian McLagan whooped up the Wilburys’ “Handle with Care,” and Heartless Bastards howler Erika Wennerstrom, who told the crowd she got her band name from the trivia question, “What is the name of Tom Petty’s backing band?,” had so much fun playing “Yer So Bad” and “I Need to Know” that the show then needed Jessica Lea Mayfield’s seductive crawl through “Breakdown” just to gather its legs.

Sexton, arriving without fanfare or announcement, ripped through “Don’t Do Me Like That” and got together with Arc Angels bandmate Doyle Bramhall II (who’d shown up one song earlier to play “You Don’t Know How It Feels”) for “Mary Jane’s Last Dance.” With the son of his on-again/off-again boss, Sexton also joined Jakob Dylan on Southern Accents standout “Rebels.”

As the audience learned at the beginning of Nolan Wheeler’s appearance, each performer got to pick their own track. Thus, in a perfect world, this long list of esteemed singer-songwriters might have selected tracks that weren’t culled so quickly from Petty’s greatest hits. What about “Walls (Circus),” maybe? Or “Built to Last” and “The Apartment Song”?

Then again, griping about song selection here is grasping at straws. Rarely will you get the chance to see multi-platinum artists like Norah Jones step inside an intimate venue and take cues from a no-name bassist who’s made his living covering Tom Petty songs in the city that never sleeps. Rarely will you get to see people like Butch Walker exhibit so much joy performing a song they didn’t write. Rarely will you see a girl like Ruby Amanfu, who danced like Tina Turner on a Seventies Rolling Stones stage, make Jason Isbell an afterthought.

The songs were just a vehicle. Last night, anybody who channeled Tom Petty steered the ship.

“Even the Losers,” Butch Walker

“I Won’t Back Down,” Amanda Shires

“You Got Lucky,” Jason Isbell

“I Need to Know,” Erika Wennerstrom

“You Don’t Know How It Feels,” Doyle Bramhall II

“You Wreck Me,” Whiskey Sisters

“Listen to Her Heart,” Cory Chisel

“Runnin’ Down a Dream,” the Whigs

“Time to Move On,” Norah Jones