All ATX: The Concert

‘A time to celebrate collaboration and community’ 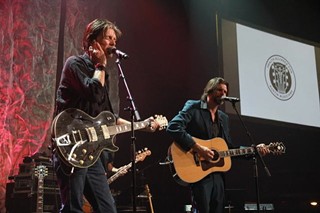 Brotherly love: Charlie (left) and Will Sexton during the All ATX concert for HAAM Benefit Day at the Moody Theater, 9.24.13 (by Todd V. Wolfson)

Music makes Austin great, and now locals have a day to honor every musician in town. It was hard to ignore yesterday’s annual HAAM Benefit Day, with shows happening all over town and many businesses pledging 5% of the day’s sales to the Health Alliance For Austin Musicians.

Hosted by KUTX’s Jody Denberg, it was, as he put it, “a time to celebrate collaboration and community.” Over more than two-and-a-half hours, special moments abounded, most of them coming as performers recreated tracks from the new All ATX benefit album, 15 songs featuring all who appeared, plus Ray Benson, Mother Falcon, Alejandro Escovedo, and Ghostland Observatory.

Highlights included a rare appearance by the Sexton brothers performing together, Will explaining that HAAM helped him during a recent health emergency. Carolyn Wonderland earned the first standing ovation of the night with a fiery guitar outburst and some hell-hound harmonica from Guy Forsyth. Marcia Ball and Malford Milligan, meanwhile, were exhilarating on the duet “You Make Me Crazy.”

Between sets there were occasional snips of film explaining what HAAM does and how it helped musicians like John Pointer and Akina Adderley. There was a special remembrance of Robin Shivers, the philanthropist whose idea of helping musicians blossomed into HAAM, as well as shout-outs to special members of the community who’ve passed on, including Clifford Antone, Doug Sahm, and Stephen Bruton.

Eric Johnson’s dexterity around a fret board explained why he’s considered a guitar hero. He was aided by Roscoe Beck on bass and Tommy Taylor on drums and together they backed Christopher Cross on a new song before he closed the night with a bracing version of “Ride Like the Wind.” The entire crew appeared for an encore, a cover of John Lennon’s “Imagine” that offered smiles all around and more than a little pride at an exhibition of Austin music that went off seamlessly and with a big bouquet of love.

There was lots of talk of how this was the first annual All ATX show. Next year let’s hope there are more younger acts included and a wider variety of music on tap. The two songs per act seemed to limit some performers who were just getting their juices flowing by the end of their second song. There were good moments, but never really any “Wow!” segments, making it less a gritty night at the Continental Club and more a pleasant evening with friends at the Saxon Pub.