Connecting to the Cosmos at Utopia Fest

I got in the van, the psych beehive, and Silent Disco 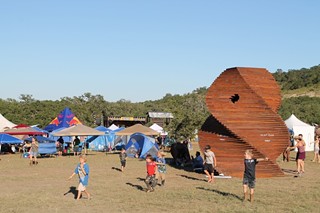 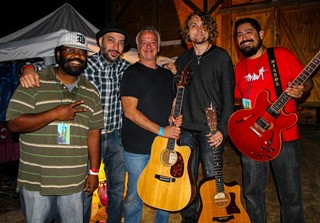 Utopia’s beehive and the children swarming it, 9.21.13 (by Kevin Curtin)

Of course it rained. What else would you expect of a music festival in Central Texas, where the skies stay perpetually blue until people gather for an outdoor concert and then it pours. So, just like last year at Utopia Fest, Friday was a soaker.

We enjoyed the raindrops from inside a van that broke down halfway to San Antonio. After a couple trips to the auto parts store and one to a mechanic, we made it to Utopia fashionably late, sliding our van next to the stage just in time to hear the last minutes of Brownout’s fiery collaboration with Parliament Funkadelic keyboardist Bernie Worrell.

The Utopia grounds are deservedly beautiful, with mountainous, tree-covered hills creating a panoramic frame where the Texas sky, even in stormy weather, looks so big and beautiful you feel closer to heaven. Our reputation proceeded us.

“Austin Chronicle van!,” hollered a familiar gang. “We pushed you out of the mud last year!”

We headed to the Arrowhead stage and endured 30 minutes of Sacramento hip-hop crew Blackalicious, whose hypersonic delivery and gimmicky “Now throw your hands in the air!” wore my patience, but seemed palatable to Utopia’s late-night recreants. New Orleans’ Galactic followed, demonstrating its musical expertise in vibrant, ebb and flow funk jams with Living Colour’s Corey Glover on the mic.

We listened from inside some polycarbon art structure that resembled a psychedelic beehive. The creator, an artist with a Santa beard named Woody, followed us in.

“Sit low,” he advised the group of eight strangers. “So you can feel the energy of the cosmos.”

“Will it help if we smoke a joint?,” I inquired?

We pow-wowed, going in a circle offering our names and where we live. As you might guess, half were from Austin, but the other half lived in or near Utopia. Just as I was connecting to the cosmos, the sounds of bluegrass drew me out of the hive.

“We’re going to play until this bottle’s gone,” ensured Shivers’ guitarist Horti, holding up a fifth of whiskey.

That much was guaranteed, as the Austinites rolled through hard, fast versions of traditional folk songs, Shivers’ tunes, and live favorite “Rocky Top.” Ellis, typically a solo act, proved one hell of a guitar player when thrown into the Shivers’ frantic mix. The collaboration wasn’t without significance; the band has tapped Ellis to produce an upcoming LP.

Capping my first night with a trip to the Silent Disco, in which you don headphones and dance to music only those on your frequency can hear, I retired to the van at the modest hour of 4:30am.

The San Antonio Pipes & Drums, a bagpipe orchestra, God bless ’em, jarred me awake at 11:30am and I greeted the day with a $1 cup of coffee that would’ve cost $5 at most music festivals. By then, the hot Texas sun had already baked the previous day’s mud solid, and hundreds – literally hundreds – of young children covered the lawn playing Frisbee, tag, and tossing footballs. Despite the fact that people are walking around with handles of whiskey and smoking copious herb, Utopia Fest remains a family friendly event.

While an early run of Americana, jam music, and foreign electro-pop couldn’t entice me out of a shaded campsite I’d discovered, the loud sounds of Residual Kid effectively jump-started my day. The local grunge trio spewed sludge out of massive amp stacks that dwarfed their teenage frames, but commanded a respectable crowd that stood at attention as the group nailed new songs. For a finale, they abused their instruments with Cobain-like recklessness.

The festival’s other heaviest local, Ume, followed with a haymaker of metallic power pop and shredding guitar freakouts by lead riffer Lauren Larson. Since Ume hasn’t played an Austin show since South by Southwest, I took the opportunity to corner Larson backstage and get an Ume update.

“We’ve recorded an album October through January and now we’re finally closing in on a record deal,” she explained. “In the past, our albums have been one experience and the live show is another. This album will bring it together.”

The LP, as yet untitled, was recorded by Seattle producer Adam Kasper (Pearl Jam, Foo Fighters, Queens of the Stone Age), and yielded 21 tracks. Larson says she hopes to have it out early next year.

Bluegrass/folk great Peter Rowan put on one of Saturday’s best sets with his Twang & Groove project, bringing a small, but dedicated audience to an uproar with the masterful execution of originals “Land of the Navajo” and “Panama Red.”

Latin music orchestra Grupo Fantasma scored the biggest daytime crowd with their extended set that included a cover of Talking Heads hit “Burning Down the House” for an encore. Breakout honors go to Brooklyn quintet Lucius, who stunned a largely unfamiliar audience with the extravagant harmonies, drum circle breakdowns, and latent heaviness of their playful pop music. Mid-set, an anniversary dedication for two audience members turned into a heart-melting, onstage marriage proposal.

“That was a real honor to be part of a moment they’re going to cherish for the rest of their lives,” singer Holly Laessig gushed backstage. “I guess our music inspires love.”

Lucius made the most of their Texas time, adding a secret, afterhours riverside set that night and a house party in Austin.

Local singer/guitarist Max Frost led a band of mostly Blues Mafia bandmates through a solid set that drew big reactions for his radio-ready tunes “Nice and Slow” and “White Lies,” though a noticeable volume issue kept him from dominating on his guitar solos.

A sober, healthy-looking Aaron Freeman (aka Gene Ween), who required an alcohol-free backstage, played a memorable unplugged set that took off when he busted out a wealth of Ween gems including “I Don’t Want to Leave You on the Farm,” “Object,” and “Pork Roll, Egg, and Cheese.”

“Do you guys want to come up and do this one?,” asked Freeman looking to the side of the stage before ushering up Greg Gonzalez, Beto Martinez, and Matthew Holmes of Grupo Fantasma for an assist on fan favorite “Buenas Tardes Amigo.” They weren’t the only locals (see photo gallery) collaborating with a big name.

Spoon’s Jim Eno was spotted banging bongos on stage with !!!, whose 2013 disc Thri!!!er he recorded and produced at his Public Hi-Fi studio in Austin. Eno appeared to be having the time of his life, jumping between bongos and a small drum kit for the group’s disco rock throwdown that had the whole festival dancing – many onstage with the band. Backstage after the set, the drummer confirmed that he’ll begin tracking the next Spoon record this week in Austin.

Finishing the night with another Silent Disco, this one featuring excellent femme-fronted hip-hop crew Magna Carda, I crawled into to the top bunk of old van, said my prayers, and slept like corpse. I woke up in Bandera.

The earth had moved beneath me, naturally. Utopia had escaped without a goodbye. My return, though, is guaranteed as long as they put on this festival.

Credit the BYOB policy, minimal security, and an audience size that prevents standing in line. Beautiful scenery and a general lack of shady behavior also makes for one of the happiest crowds of the whole festival scene. Utopia Fest, perfectly named.