Sixth year music gathering is worth the three-hour trek

A limited supply of tickets still remain for this weekend’s UtopiaFest, the Texas festival circuit’s best kept secret. If you’ve got a tent and no plans, start loading up the car.

Off the talent list’s beaten path sits wildly experimental Boulder, CO., electronic duo Eoto, which kicks off the festivities at Thursday night’s pre-party (accessible for current ticket holders for another $35), and local hip-hop upstarts Magna Carda, headlining the festival’s Silent Disco offerings that run late into the evening each night.

A full lineup and schedule’s available at the UtopiaFest website, and reflects the substitution of local indie pop troupe Holiday for Memphis folk-soul trio Star & Micey, which canceled on account of an injury. Truth is, there’s a whole lot more to UtopiaFest than meets the bill card. That’s something I can claim from experience.

I trekked out to Utopia last year amidst a driving rainstorm, set up a tent on a hill, and had a blast in the mud, mostly because of the way the festival’s intangibles make having a blast in a storm so easy. It’s BYOB – BYOeverything, really, as long as it ain’t glass – so you’re not shilling out crazy dough, and the festival’s designed so you can scope out every show. No overlapping sets, and a closely situated set-up of only two stages, makes it easy to hop from one show to another.

And the fact that the festival caps its attendance around 2,000 means that you can generally maneuver your way pretty close to the front of the crowd for the shows you most want to see.

It’s no cakewalk. UtopiaFest’s as close as local festivals will get towards roughing it – or steering clear of amenities like showers (available for a small fee) and Internet (it’ll still be there when you get back). This weekend carries a 60% chance of rain throughout, too, so be prepared to kick some mud up on your calf muscles.

With that in mind, we’ve compiled this quick survival guide of what to bring below for those planning to make the trip. Full weekend tickets are available for $129, with Saturday passes available for $79.

Booze. Nobody’s selling ice, and it’ll be hard to keep what ice you do bring from melting, so we suggest liquor and wine, displaced from their glass bottles into plastic containers.

Food. Grills are fair game, so bring whatever it is you’re trying to cook up, though certain concessions will be available at the festival, as well.

A tent. Necessary, especially if it rains.

Some kind of sleep mattress. Everything’s utopian except for the ground, which is rough, rocky, and ready to throw a knot in your back. Bring something to cushion the turf.

More water than you think you’ll need. The festival has a few filling stations, plus bottled water for sale, but I never saw either of the two last year.

Weather gear. Temperatures are supposed to dip into the Sixties, and of course it’s likely to rain.

Dogs. Just kidding. Dogs are only permitted if they’re of the service variety and you’ve got the appropriate paperwork. Otherwise, leave the pooch at home.

Shower supplies. The festival provides shower facilities for a small fee, but really, who’s showering out there on the farm? 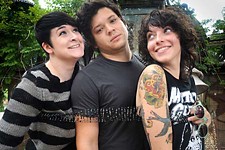