The Cosmic Psychos: Blokes You Can Trust 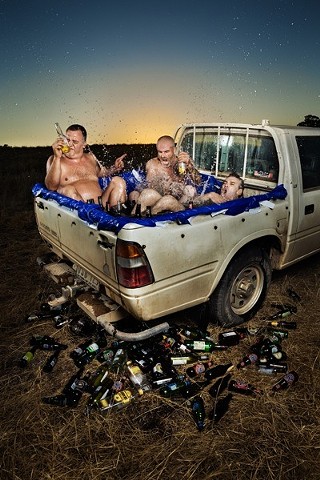 “Beerland? Ah, shitsyeah! I like the sound of that place.” Ross Knight’s spirits were high when he called from Australia to talk about the Cosmic Psycho’s trip to Austin – a better mood than when filmmaker Matt Weston interviewed him for the Cosmic Psychos doc Blokes You Can Trust.

At the time, the singer was in the thick of a messy divorce and trying not to lose his family farm. Such is the doc’s brutally honest look at Down Under’s fiercest, thirstiest pub rock heroes over their 30-year career. Blokes You Can Trust gives you a candid glimpse into the psychology of Knight, punk rock singer, champion weightlifter, legendary drinker, career farmer, and world class shit-talker.

He’s one of the great and unlikely cult characters in rock & roll.

Blokes You Can Trust screens 8pm Wednesday at Beerland, followed by performances from locals the Ghetto Ghouls, Golden Boys, and finally Cosmic Psychos.

Austin Chronicle: What’s it like for a humble farmer like you to have a documentary made about them?

Ross Knight: The band was a totally fucked-up circus for 30 years and Matt Weston found a way to make a story out of it. He got me at a good time, because I probably wouldn’t have been so honest and candid if I wasn’t so completely distracted with everything else at the time. Watching it feels like going back in time, seeing all my old mates. One second of footage brings back a million memories for me.

AC: It has a really great collection of guys talking about the Cosmic Psychos: Buzz Osborne from the Melvins, Mark Arm from Mudhoney, Eddie Vedder, Butch Vig. What was it like listening to what they had to say about you?

RK: It was amazing and terribly flattering. You’re right, they’re all amazing people and I’m proud to call them friends for a long, long time. When they did the interviews, those guys all taped personal messages to me. I was pretty down at the time and it was very uplifting. I don’t think of any of those guys as being famous or being in a band. I think of them as my mates. We shared more time with a beer in our hand than onstage. It’s a good way to be.

AC: Speaking of that, you say in the documentary that the Cosmic Psychos have more fun on tour than any other band. Is that still true today now that you’re older?

RK: Oh we may not see the sun come up as many times as we used to, but I’m not talking about throwing TVs out the window or being a complete rock & roll asshole. We just have a blast. The good thing about the Pychos is we all work, so when we go away with the band, we’re happy that we don’t have to get up at 5am. We can go to bed at 5am! We have a lot of laughs and we enjoy every moment even if we’re drunk all the time.

AC: How much does being working class influence the sound of the Cosmic Psychos?

RK: The Cosmic Psychos sound has really morphed out of machinery. Most of the songs I’ve ever written have been while I’m sitting on a tractor or sitting on a bulldozer. It couldn’t be any more agricultural. That’s where the sound comes from, everyday stuff.

There’s tons bands who try to solve all the world’s problems, but there’s not too many bands who sing about nothing. They think they have something important to say and we have our hand in the air saying, “Well, we don’t!” Good luck to ’em, it means I don’t have to. It makes my life a lot easier.

AC: “Nice Day to Go to the Pub” is a great example of that.

RK: That’s the greatest song we’ve ever written. I think. I love it. It should be the ad for a beer company.

RK: Beet root. I guess you guys call it beets. It’s kinda red and you put it in a salad.

AC: It makes your piss red.

RK: That’s the one! I love the stuff and I was eating a can the other day and going, “Fuckin’ A, the only time people eat beet root is when they go to the pub!” You order some food and they bring that out. I love it. Why don’t people eat more beet root? The song came out of that. It’s simple.

AC: What does Blokes You Can Trust refer to?

RK: It’s the title of the album we recorded with Butch Vig. I guess at the time we were very unimportant, because there was a lot of cool music happening and we were just bumbling away following our own footsteps. “Blokes” means “simple men” and we were honest. We weren’t there to look cool, we weren’t there to change the world. We were just there to make people get pissed and have a good time. If you went and saw us, you knew you’d leave the pub with a smile on your face. You can trust us for that.

AC: Have you played Austin before?

I said, “Can I borrow your amp? I’ve never blown an amp in my life.” He goes, “Yup, no worries” and then the thing burst in flames.

So we’ve got an amp on fire, some chick dancing onstage with her clothes off, and it was just one of those gigs that you wanted to last forever.