Austin’s concert calendar can be overwhelming. Allow me to plan the latter half of the week for you.

Brownout christened its month-long residency at Frank last Thursday with a hip-hop-themed set that found the Latin hard funk outfit joined by MCs and fellow locals Riders Against the Storm and Bavu Blakes for a performance that was nothing short of amazing. Every week, the Grupo Fantasma offshoot performs with a new theme and guests. They try to top themselves this Thursday with an interpretation of James Brown’s Black Cesar soundtrack, retitled here as Brown César.

Is there a better way to spend Friday the 13th than witnessing the Geto Boys performing their paranoia anthem “Mind Playing Tricks on Me”? Friday’s show at Emo’s marks the second time this year the legendary Houston rap trio, which wrote “Damn It Feels Good to Be a Gangsta” and “Mind of a Lunatic,” have played in Austin. After January’s show, Bushwick Bill stuck around town for a couple months and recorded his upcoming solo disc. Perhaps Scarface or Willie D will take up residence this time.

Before local folk-punk orchestra East Cameron Folkcore shoves off on its first European tour, they stop in at the White Horse for a send-off. At midnight, they’ll premiere a video for “Worst Enemy” off their For Sale LP from earlier this year. The video’s directed by local filmmaker Reid W. Connell and, judging by the stills (see image gallery), involves animal masks and lots of blood.

Through it’s equally a ploy for local vendors to slang hip used clothing on the back patio, you just can’t argue with the quality of Saturday’s lineup at Hotel Vegas. Seventies punk survivors Sons of Hercules and T. Tex Edwards’ Purple Stick Pin; garage blues veterans the Crack Pipes and new rock & roll hopefuls the Bad Lovers; a trio of must see metal bands in Ditch Witch, Sweat Lodge, and the Well; and finally the vintage dance-boogie-blues Motel Ball Band. Witness the past, present, and future of underground rock & roll in Austin.

Broncho, Mozes & the Firstborn, the Blind Pets at Stubb’s inside, 9pm

Oklahoma City’s Broncho will restore your faith in bar rock. They’ve got great songwriting, a high-energy live show, and with Ryan Lindsey, a singer with real swagger. They’ll appeal to fans of both the Ramones’ guitar crunch and Black Lips slop-pop. Here they’re joined by Belgium rockers Mozes & the Firstborn and kindred locals the Blind Pets.

A few years ago, when Club 40 was still enforcing its “40 and up” age limit, I heard this great soul and blues coming from inside the 12th Street club, so I found a way to sneak in. The joint was absolutely packed and though I was 15 years too young and the only white person in the building, no one noticed me because all eyes were on the band. The singer, JBG, aka Jonny B. Good, was taking women out of the audience, sitting them down in a chair onstage, dropping to one knee, and serenading them. The women looked like they were about to faint, and so did everyone else. The way he had everyone in the palm of his hand brought me to recognize that there are great entertainers in this town that most of Austin will never see.

JBG performs at the inaugural Eastside Kings Festival, which employs four 12th Street locations on Sunday evening for a rarified revue of blues, soul, gospel, funk, and jazz from mostly African-American locals. This incredible lineup kicks off at 5pm with the Bells of Joy, a Texas gospel group formed in 1951. I highly recommend checking out Smithville country-blues veteran Hosea Hargrove, who’s been playing so long he rode a horse to his first gig (6pm, Legendary White Swan), local all-stars the Texas Eastside Kings (7:45, Legendary White Swan), who I’m told will be joined by some very famous special guests, and showstopping harp-blower Birdlegg (8:45, Club 40). 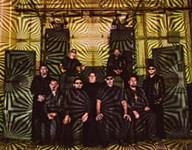 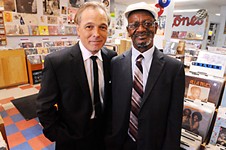