Slate’s Slate: Preserve the Past

‘Lost Austin’ and other ‘hysterical’ markers 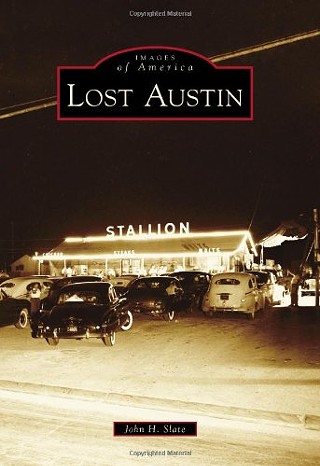 Lost Austin arrives as a gem of book, and no small part of its charm is author John Slate. If Slate’s a safe citizen these days, at age 15 in the punk rock Seventies, he went by the alias Control Rat X, editor of the zine Xiphoid Process. Today, he’s City Archivist for Dallas, though his heart lies in old Austin.

Slate appears tonight at BookPeople, 7pm, to discuss his bound endeavor. The cover photo preserves the Stallion Drive-Inn Restaurant on North Lamar, which when posted on Facebook recently, elicited rapturous responses and memories of cheap chicken-fried steaks with yellow gravy. It’s a hint of the places in the past that Slate presents.

This isn’t the first book Slate’s done for Arcadia’s Images of America series. He authored Dealey Plaza, site of President John F. Kennedy assassination in 1963. Nor is it Arcadia’s first venture into Lone Star culture. They published Fort Worth’s Rock & Roll Roots by Mark Nobles about the Fort Worth teen scene of the Sixties.

For Slate – born, raised, and educated in Austin – it was a chance to plumb the depths of the Austin History Center, which functions as the collective memory bank of Austin and Travis County, and give something back. Lost Austin sales profit the History Center’s preservation of historical materials.

“I loved researching and writing Lost Austin, because it gave me an opportunity to communicate to others the places and things that I personally felt made Austin special,” writes Slate in response to a query about his life as a cultural investigator.

“In many cases, [with live music venues] such as the Armadillo or the Split Rail, the buildings themselves are not architecturally significant, but they nonetheless produced memories and feelings that thousands still carry in their hearts and minds. [Amusement park] Kiddieland on South Lamar was a rickety, scary thing by the time I was a tot, but it was a big deal for older folks like my older sister.

“My parents indulged me while growing up with books and visiting museums and historical sites. On family road trips, I had to stop at every ‘hysterical’ marker, probably to some consternation. I’ve been a non-fiction fan my entire life and although I love good fiction, I’ve always been more drawn to the amazing stories of real people and real places.

“All of this was cemented by the 13 years I spent at the Barker Texas History Center, now the Briscoe Center, where I discovered in a matter of weeks that handling the actual materials of history was what I wanted to do with my life. Plus, there are just too many great stories that too few people know about.

“It’s my mission to help get the word out.”

The Chronicle has published two ‘Lost Austin’ issues, one in 2001 and a sequel two years later.