Reelin’ in the Years

Steely Dan follows up the Armadillo with Bass Concert Hall 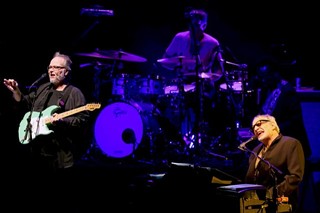 According to Walter Becker Wednesday at a sold-out Bass Concert Hall, the last time Steely Dan played in Austin was at the Armadillo World Headquarters (1970-1980). The group that performed last night had the same name and some of the same songs, but was worlds apart. Becker and Donald Fagen remain, but their band now approaches an orchestra.

Thirteen pieces, including a four-man horn section and three backup singers, filled the stage, and with a sound to match. Becker and Fagen, meanwhile, remain anti rock stars. There’s nothing outwardly flashy about what they do, and most of their music tilts closer to jazz that balls-out rocks.

As such, the band astounded the well-heeled and well behaved throng for just over two hours with serene lighting, perfectly intricate sound, and a performance spanning the length of their career, from 1972 breakout “Reelin’ in the Years” to “Godwhacker,” off 2003’s Everything Must Go.

There were lots of crowd-pleasing moments: the stomping “Bodhisatva,” featuring a fierce solo from guitarist Jon Herington and the double funk punch of Aja twofer “Josie” and “Peg.” A few tunes were rearranged to be almost unrecognizable, the surprising “Razor Boy” bearing an Asian tinge and “Showbiz Kids” losing some of the zip it possessed on record for a jazzy gloss.

Becker displayed a dash of the Dan’s slippery humor with a lengthy rap about tequila in the middle of “Hey Nineteen,” then surprised everyone with a strong vocal on “Daddy Don’t Live in That New York City No More,” a song he didn’t sing originally. With his dark shades and a slight lean, Fagen brought to mind Ray Charles as he sang and worked the keyboard, his voice a bit raspier than most remember, but still strong, especially given the help of a harmony trio in Carolyn Leonhart, Catherine Russell, and La Tanya Hall.

The Steely Dan that played the Armadillo wouldn’t have kept up with the band that played Bass Concert Hall. There was a lot more grey hair, for starters. Yet their unparalleled musicality explains their longevity.

“Time Out Of Mind”

“Daddy Don’t Live in That NYC No More”

“I Wanna Do (Everything For You)”

“Reelin’ in the Years”