The Devil, You Say!

Churchwood – before their arrest (by Leon Alesi)

“It was a video program that came bundled on my computer,” laughs singer/lyricist Joe Doerr about Churchwood’s lo-fi video of “I Have the Devil in Me” that’s been gathering steam on YouTube. “I saw the videos of the Russian tourist and knew that was it.”

It’s a quirky clip, Russians at a resort being led through an exercise class by a bored instructor. That might sound like a snooze until you see the instructor, a corpulent man in a Speedo swim suit throwing hand gestures and hip-shakes into the mix. Yes, he’s fat and some find him repellent, but I see him embracing life to the fullest, to hell with a waistline!

Doerr synced the man’s struts and shakes with a track off his band’s second full-length, Churchwood 2. As much as “I Have the Devil in Me” sounds written for the feral local fivepiece, group founder Bill Anderson wrote the song in Big Foot Chester, which recorded it first. BFC’s version kicked more gutbucket, but Churchwood’s is darker and smokier. 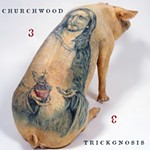