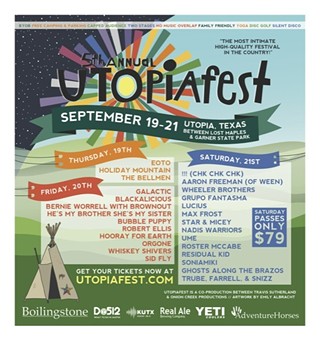 When you attend some 20 music festivals a year, as I do, you come to understand the benefits and disadvantages of each one, with location, line-up, and size all playing major roles and vibe remaining the profound X factor. All that considered, Utopia Fest – now in its fifth year – stands out as one of my favorite festival experiences in central Texas.

Though it’s named for the underpopulated Hill Country hamlet two-and-a-half hours southwest of Austin, Utopia Fest earns its moniker by striving for an ideal festival experience.

Organizers cap ticket sales at 2,000 to prevent overcrowding. That means no long lines for Porta Potties or food, and easy views of the stage. Considering the festival grounds sit on 1,000 acres, space isn’t an issue. Additionally, there are only two stages and no overlap in music, which means you never have to choose between bands.

Also of major significance: free parking and camping. And you can bring your own beer – not that we don’t all love the $8 Heinekens available at big music fests. They also host unique festival activities like disc golf and yoga.

Of course it’s ultimately about the music. Performing at this year’s installment are dance punk party starters !!!, funk jammers Galactic, and Aaron Freeman (aka Gene Ween), who released a pretty boring solo album this year, but continues to play excellent versions of Ween songs in his live sets. Perhaps the fest’s hippest booking comes with impressive Brooklyn indie-pop quintet Lucius, poised to explode after a standout performance at Bonnaroo this year.

Utopia Fest happens Sept. 19-21. Tickets are moving, so if this all sounds amenable, act now. It’s $129 for the weekend, an additional $35 for the Thursday pre-party, and $79 for a Saturday day pass.

If you’re on the fence, catch an early vibe next Thursday, Aug. 29, when Utopia Fest hosts a party at its Onion Creek offices (2708 S. Lamar), with free beer and a special performance from one of the acts playing this year.