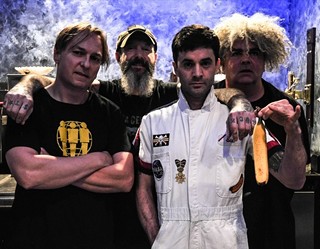 When forming the Melvins in Washington State at Montesano High School in 1983, with drummer Mike Dillard and future Mudhoney bassist Matt Lukin, guitarist/vocalist/mainstay Buzz “King Buzzo” Osborne admits that lasting three decades wasn’t even a fantasy. Tonight’s 30th anniversary show at the Mohawk is no less surprising to the 49-year-old.

He and his compatriots were simply aiming to become the heaviest, most experimental, and possibly the funniest of punk bands, inspired by hardcore’s genre-skewing sludge merchants, including Flipper and My War-vintage Black Flag.

Along the way, aided with the ever-evolving band’s other stalwart, drummer (and occasional bassist) Dale Crover, the Melvins demonstrated that 10 tons of granite heaviness can be intensely creative and loads of fun, inspiring many along the way, including Tool, Boris (who took their name from a Melvins song title), Mastodon, Neurosis, Eyehategod, and Isis.

AC: It’s intriguing to see this stylistic breadth, because I do think a lot of people may think of the Melvins as just another very heavy band.

AC: Talk about some of these songs. For one, you’ve got a ton of guests on the album.

BO: Well, some of ’em made sense. Like, having been friends with the guys from Tweak Bird, we knew the singer [Caleb Benjamin] would be able to do the Queen song [“You’re My Best Friend”] really well. And he did a great job on that. We’re all singing on that, but he did the main vocal. It’s fun to do stuff like that!

The Kinks song [“Attitude”], we’d already recorded. Then we were able to have Clem Burke play drums on it, which was kind of a dream come true for us. I’ve always been a huge Blondie fan, and he did an amazing job on that. We were super-happy to have him!

Mark Arm made total sense, because we’ve known him forever. And he made total sense for the Scientists cover [“Set It On Fire”]. Obviously, Mudhoney are big Scientists fans. We knew he could do a great job on that. He added a whole other element to it.

Jello Biafra was the obvious choice for Roxy Music [“In Every Dream Home A Heartache“], because let’s face it, with his whole trip, the singing is Bryan Ferry. No one seems to realize that, but that’s the case.

[Foetus’] Jim Thirlwell we’ve been friends and fans of forever. I asked him what he wanted to do. When I brought up Bowie, he said, “Ohhh! Let’s do BOWIE!” We did “Station to Station,” which is a kind of difficult song. I don’t know that anyone’s ever covered that. Kind of a challenge, but we did it! I think it came out really good, and Jim did a great job on it.

The Venom song [“Warhead”], we were always big fans of Venom. Scott [Kelly] from Neurosis had played with Dale in [stoner/doom metal supergroup] Shrinebuilder, so we kinda had a little relationship there with him. Plus we had been friends with those guys forever. Scott did a great job on that! I knew he had it in him. It’s a difficult vocal to do on that song. Scott did a perfect, perfect job!

That’s everybody who comes to mind – off the top of my head [laughs]. We had a great time doing that record. It’s a peak into things that maybe not everyone would associate as an influence on us. It seems obvious to us.

AC: Right. And in every single case, you’re putting your stamp on these songs, to the point of really dramatically transforming them in some cases. The Bowie cover, especially: It’s recognizably Bowie, but there’s a definite rearrangement to it.

BO: Thankfully enough. It sounds like us, half the time. But I sorta hear a little bit of Bowie in every single thing we do. You can find elements of everything. Jim Thirlwell said that as well. His stuff is so based in those records. It’s hard to get away from it.

AC: Absolutely, especially with people of our generation that grew up in a small town. Bowie was a gateway into a broader world.

BO: Oh, yeah! For me, it was. I’m pretty much a fan of everything from his second album, Space Oddity, through Scary Monsters. Everything in that period between those two records, which represents about a 10-year period, is incredible.

AC: I loved your team-up with Tom Hazlemyer [Halo of Flies, Amphetamine Reptile Records] on that Jam song, “Art School.”

BO: That came out great!

AC: A lot raunchier than what the Jam did with it, as great as the Jam are.

BO: Well, we’re fans of all the stuff that’s on there. It was really fun to do. Getting things done: In the last year-and-a-half, we put out the five-song EP [The Bulls and the Bees] with the regular Melvins. We did a full-length album [Freak Puke] with the Melvins Lite. We’ve done a four-song EP with the Melvins 1983, with me, Dale, and our original drummer Mike Dillard playing. Then we put out this record. That was all about a year-and-a-half.

So altogether, it was this huge amount of work in that period of time, and it all came out great. And now we have another record coming out called Tres Cabrones. That’s with the Melvins 1983. All-new songs, with Dale playing bass and Mike Dillard, our original drummer, playing drums. That comes out in November.

In less than two years, we have two full-length albums, a full-length covers album, a host of 7-inches and 12-inches, and two EPs by three different lineups of the band. Kind of impressive, isn’t it? Nobody has done that.

BO: No band alive ever has done anything close to that.

AC: You’re doing all this stuff independently, as well. It’s a furious work rate, and it says a lot about your audience that they support you doing such an enormous amount of work in such a compressed amount of time.

BO: Well, it’s just records, y’know? People can afford medical marijuana, so I think they can afford to buy our records!