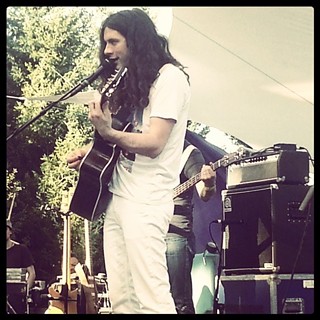 Kurt Vile, also appearing in Austin at the Mohawk on Aug. 20. (by Austin Powell)

Tucked in the woods of Pendarvis Farm, on a small wooden stage shaped like an upside down bird’s nest, you could actually hear Feist tapping her foot to accompany “The Bad in Each Other,” a dagger from her 2011 album Metals.

“I’ve been taste-testing festivals around the world all summer,” she told the hushed crowd, seated on hay bales at her request. “Pickathon is the best. It’s what every other festival out there is trying to create.”

That’s not typical small talk, either. The sentiment gets tossed around like a bottle of sunscreen.

Now in its 15th year, the roots music festival could be considered the antithesis of Lollapalooza. Held on a competing weekend just outside the Portland, Ore., city limits, Pickathon captures the very best traits of the Pacific Northwest – if not it in its lineup than in its community spirit and “leave no trace” mentality that defines everything from the transportation options to emphasis on waste management. (All food and beverages get served on actual plates and stainless steel cups.) There were almost enough green initiatives to cancel out Dale Watson’s tour bus, which stood out like a Texas billboard backstage.

Pickathon’s almost entirely volunteer run, the food carts offer a genuine taste of Portland, and the billing – with each act playing at least twice, on different days and stages – creates a casual intimacy that’s altogether rare at fests.

Then there’s the camping: makeshift forts of strewn blankets and hammocks tied between trees, where the faint sound of bluegrass caps the night and the mainstage soundcheck greets the morning.

Of course, it’s the music above all else that makes Pickathon a worthy annual retreat. Here are my Top 10 highlights from the weekend.

Like witnessing Roky Erickson’s early comeback shows, every Relatives performance feels like a minor miracle, some sort of spiritual revelation I can’t quite grasp. Under the torn canopy that covers the mainstage, Rev. Gean West delivered a modern-day tent revival, a gospel-soul revue that pulled equally from the band’s original recordings and this year’s stellar follow-up, The Electric Word.

West always takes me by surprise. At moments, he doesn’t look like he’s fully aware of where he is or why he’s there, but then he raps to the crowd, or lets out one of his scarred howls, that makes his purpose clear. The Relatives’ 10-plus minute version of “Don’t Let Me Fall” had the feeling of an unintentional flash mob, the entire crowd swaying from side to side, then on hands and knees, as if in some “Thriller” outtake looped like an animated GIF.

There’s something a little off about seeing King Tuff in the middle of a field in the afternoon. His slacker power-pop epitomizes Saturday night rock – all cheap beer and dank clubs – and few do it better. Yet with “Freak When I’m Dead” and “Kind of Guy” from 2008’s recently reissued Was Dead, Tuff brought a party.

Imagine if you tried to clean up Scott H. Biram and make him presentable to your parents. That’s Shakey Graves, Austin’s bright new one-man band. He has the look (a lonesome troubadour) and the sound (a sort of locomotive folk), with a suitcase full of songs about vagabonds and tramps. He may still be better known for his time on Friday Night Lights, but that won’t be the case much longer.

On what’s known as the Starlight Stage, set up in the middle of the festival grounds, Vile played near the witching hour on Saturday, unfurling an hour’s worth of twisted psych-folk. Sprawled out, lying flat on my back, it sounded like lethargic lullabies, but a visceral rendition of Childish Prodigy’s “Freak Train,” with searing sax and off-the-rails Krautrock percussion, brought me back to my feet and full attention.

It might have started as a one-off collaboration, but Spoon’s Britt Daniel and Handsome Furs’ Dan Boeckner keep pushing further in with Divine Fits. Live, the two played to each other’s strengths – Boeckner, the on-edge livewire; Daniel, the veteran anchor – and, as reiterated by new single “Chained to Love” and an ace cover of Tom Petty’s “You Got Lucky,” they just keep getting better.

In her last show of 2013, Van Etten warned the crowd that she might cry in the middle of the set. “I don’t want you to think I’m too emotional.” A beat, then “Shit! Cat’s already out of the bag.” The Brooklyn songstress’s torch songs – more smoke than fire – tackle the tangled lines between love and abuse, and she carries the weight well. Between her deadpan humor and new material, I got the impression she’s finally starting to let more of the light in. Worth mentioning: Heather Woods Broderick, a former member of Efterklang and notable solo artist, has become an essential backing vocalist, inhabiting the nooks and shadows of Van Etten’s songs as if they were her own.

Touré stands in the shadow of giants, namely his father, Ali Farka, but he knows how to work the festival circuit. Not unlike Bombino at last year’s fest, Toure turned his elliptical West African blues into a high-energy trance music that seemed to stretch for miles.

I didn’t get the hype behind Light Up Gold. It seemed tossed off and bed-headed. But live, the Brooklyn/Denton four-piece took all the right cues from Our Band Could Be Your Life – namely the Minutemen’s intensity and Sonic Youth’s NY edge – and closed with the combustible “Stoned and Starving.”

“I haven’t done this in seven years,” Feist prefaced her solo set Saturday on the Woods stage. She’s avoided playing alone, instead “looking for a piece of quicksilver” in the enormity of her songs. Especially in contrast to her headlining set the following night, Feist let her guard down. She was candid and funny, sharing personal tidbits (her dog's named Bailey, and what she lacks in size she makes up for in bark), while breaking her songs down to their bare essentials. Her slow rendition of “My Moon, My Man,” with looped vocals, was simply stunning.

She ended her set backed by a pianist and drummer, but even then the instrumentation was reserved. The highlight: Feist stationed atop the piano, pounding her fist during an unnerving version of “The Limit to Your Love” that sounded more like James Blake’s cover than her own original. 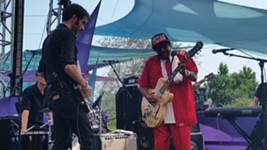 Midnight Pickathon
Out in the woods of Portland, Ore., lives a music festival