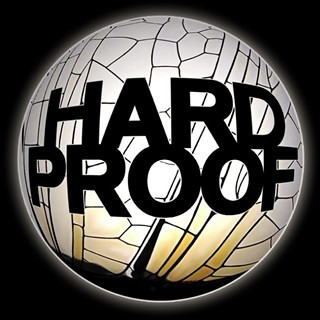 You’d think that the music of Hard Proof Afrobeat, a local act with the genre to which it pays homage firmly imbedded in its name, would be easy to pin down. Think again. A cursory overview of afrobeat leads readers through a labyrinth of African history that transcends music, borders, language, and politics.

The best place to start remains Fela Kuti, afrobeat’s most famous composer and the man who coined the term. The music the Nigerian funk orchestrator created throughout the Seventies set the mold for what the genre would become in the decades to follow.

Given the music’s rich history, I wasn’t surprised that Hard Proof drummer Stephen Bidwell and trumpeter Derek Phelps arrived to our conversation well-versed and passionate about the music that inspired them. Unlike those of us whose musical obsessions fall a bit closer to home, I was curious how, in a time before Spotify and YouTube, a fan of afrobeat – or better yet, an aspiring composer of the sound – got started, and what first attracted them to the music.

“I started to seek this music out in the mid-Nineties,” explains Bidwell. “A lot of reissues and compilations made things easier. Many of Fela’s records got released on CD, and there was the extensive Ethiopiques series. Actually seeing any of this stuff on vinyl was kind of rare, and I say that having spent most of my free time in record stores back then.

“Things are much more available now, obviously. Aside from big names that westerners might know – Fela, Mulatu Astetke, King Sunny Ade, Ebo Taylor – the more obscure stuff ends up being one track someone emailed you with a name you can’t pronounce and can’t find any other songs by the artist.

“The first song we learned when we were assembling this group was ‘Muziqawi Silt’ by the Walias Band, and I don’t know that I’ve heard anything else of theirs. I started buying these records when I was studying traditional folkloric drumming back as an undergrad at a world music school. When we started this band five years ago there was a lot of audio passed around.

“I recall a Pitchfork compilation called Africa 100 that was a good primer; blogs like Awesome Tapes from Africa and Voodoofunk can save you from a lot of crate digging and find some really cool stuff.

“I also had a friend who DJ’d an African night for years; he gave me about eight gigabytes of stuff he had gotten from pen pals in Africa and other DJs. I’ve still barely made a dent in listening to that stuff. The African continent really is bottomless when it comes to its pop music.

“Take a country like Ghana. Ghana isn’t that big, but within that country there’s something like 60 to 80 different spoken languages. Think about that and imagine that everyone has their own subset of pop music or deviation. It’s bottomless.”

Austin Chronicle: With all that to consider, do you make distinctions between your blend and what can be called traditional afrobeat?

Derek Phelps: Well to start, we don’t have a vocalist and we aren’t overtly political.

Stephen Bidwell: Also, a lot of our music – even our covers – isn’t based necessarily on this afrobeat music that came from Nigeria in the Seventies. We almost immediately starting playing other stuff like Ethiopian music and Ghanaian music and the many flavors of African pop music. We inadvertently took a Pan-African approach according to what we liked. I know Jason is into Mulatu Astetke, whose music is famously in the Jim Jarmusch movie Broken Flowers. So sometimes when he’s writing, he dips into that.

AC: Is there a clear cut line that makes something afrobeat?

SB: People say highlife kind of begat afrobeat in a way, more or less, but there’s a funny debate between Nigerians and Ghanaians. If you ask a Nigerian, they’ll tell you they invented everything. Ghanaians will tell you highlife made afrobeat because Fela had a highlife band before he started calling it afrobeat, and it just gets into funny arguments about origination.

DP: It’s interesting, because I always thought of afrobeat as a sort of funk music brought from James Brown. You hear so much of James Brown in afrobeat with the shouting and the feels. So that’s interesting because highlife is almost calypso or Caribbean or Latin.

SB: I’m sure there was something in the diaspora, the back and forth between the New World and Africa, when the State Department no doubt sent over a bunch of Harry Belafonte records, which got lifted and incorporated.

AC: How exactly do you compose, since it seems rhythmically inspired? Are you developing grooves first and forming the horn parts or melodic lines around it?

DP: I guess everyone writes differently. We have a lot of songwriters in the band. Almost everybody has written a song or multiple songs.

AC: How does that usually start?

DP: That depends, because as a trumpet player, I think of melody first. That’s changing, because recently I’ve been thinking of grooves.

SB: I can’t think of too many times where songs came out of jamming, because there’s 10 guys and just getting in a room and jamming usually ends in us cracking up laughing. But usually, someone will bring in a chart and won’t have everything, so something is left up to the rest of us.

AC: How democratic is that process? Does some stuff not make the cut, or are there situations when there are just too many cooks in the kitchen?

SB: We made a message board with a thread for each song so anyone that wanted to participate and make their opinion heard jumped onto that, and I thought that was a pretty good way to work. We attempt to be a democracy, and I think for the most part we achieve that.

AC: I’m assuming that a lot of your music is directed towards enhancing the live show. Was it difficult to get into the studio and keep that energy?

SB: We ended up using a lot of live stuff, but we overdubbed percussion and a lot of guitars as well. But we used a lot of original horn takes directly to tape.

AC: Because there aren’t lyrics or vocalists, are the songwriters using song titles to insinuate themes or meanings of the songs?

DP: It’s either a vaguely political title or a bad pun. Usually a bad pun.

SB: More often a bad pun, but usually 80 percent of what comes out of Derek’s mouth is a bad pun.

AC: Any plans to get back into the studio?

SB: We’re making a single with Jim Eno at Public HI-FI, and we’re going to attempt to do that entirely live and completely analog from top to bottom. And we will be releasing it as a 12-inch 45 rpm single and we’ll hopefully track that in October. Also, we’re talking about doing a recording collaboration with Zorch, which runs a venue on the East Side called the Museum of Human Achievement.

AC: I heard about that place. It used to be an old sex shop or factory or something.

SB: I haven’t heard that, but it makes the name Museum of Human Achievement that much more brilliant. Hopefully we will do that in the winter. We’re getting prolific again with the writing, so hopefully we will have an album to track by next spring.

Down on the Farm
A wild night at the annual Red, White & Blue Ball 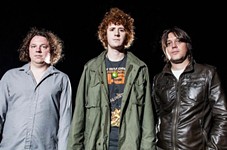