Thirty years of David Lowery in two sets at the Mohawk

Both their most recognizable bandmember and bandleader, Camper Van Beethoven and Cracker frontman David Lowery is never the star of the show, paradoxically. That designation falls to the music.

CVB arrived at the Mohawk on Friday night with a spiffy new album, La Costa Perfida, their eighth. The lineup’s shifted over the years, but the quartet of Lowery, multi-instrumentalist Jonathan Segel, guitarist Greg Lisher, and bassist Victor Krummenacher, perhaps the longest running core of the band, was joined by drummer Frank Funaro, who also plays with Cracker.

Camper opened the double bill with a spunky mix of old and new, tying all 30 years together with a reasonable amount of spirit and a healthy dollop of stoned irreverence. Typical of the band’s intractable range was a suite that ran together slowed down versions of the Clash’s “White Riot” and Black Flag’s “Wasted” with their own rock anthem “Shut Us Down,” and a Middle Eastern/ska instrumental “R ’N R Uzbekistan” – all in under four minutes.

Further proof of their continued creativity came from newer songs, especially the dreamy “Northern California Girls,” a late retort to the Beach Boys’ love of “girls, girls, girls.” What originally began as a snot-nosed attempt at alterna-folk, punk, ska, has ripened over the ensuing decades into what Lowery referred to as “art rock.” He thus led CBV’s trademark cover of Status Quo’s “Pictures of Matchstick Men,” and threw down crowd-pleaser “Take The Skinheads Bowling” like they were both new.

Cracker appeared some 20 minutes later with guitarist Johnny Hickman spelling Lisher and Segel so the music could take a slightly more serious tone. Hickman plays guitar god to the hilt and seasoned Lowery’s more straightforward yet still slightly-off-their-axis songs with steely riffs. The group mixed country twang and loud electric blues with the expected classic rock of “Low,” “Eurotrash Girl,” and a deathly morose version of the Grateful Dead’s “Loser.”

I’m forever in debt to Lowery for ranting through “Teen Angst,” which reminding me of an all-time favorite line of his: “What the world needs now is another folk singer like I need a hole in my head.” 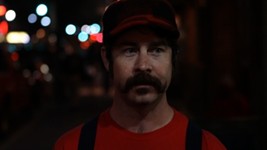 Austin Shorts at Sundance
David Lowery and the Zellner Bros. to do the 'Dance