Continental Club’s back door guardian and possessor of secrets 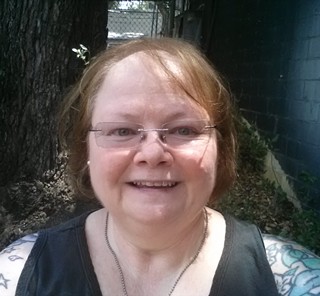 Steve Wertheimer owns the Continental Club, but Dianne Scott remains its face. After moving to Austin from upstate New York in 1987, Scott went from being a booking agent and regular at Blues Specialists shows to working full-time at the Club.

“The Continental Club isn’t just my job,” she affirms. “It’s my passion.”

Scott works the Club’s back door and handles its publicity and newsletter, which she launched in 1996. She’s also the venue’s historian, periodically giving tours and recounting the South Congress landmark’s illustrious history.

“Working the back door can be challenging,” she laughs. “I often say that my job is to make sure everyone has fun – just not too much fun! For a long time I was the only back door person, and I worked seven nights a week. That area is my domain and I run it like a benevolent despot.”

It’s difficult for Scott to decide on her coolest experience.

There have been plenty of odd experiences, too.

“During one South by Southwest I refused to let Pete Yorn in the back door,” she remembers. “We were at capacity. He tried everything. At one point, one of his bandmembers asked if I knew who Pete was. I said I did. Finally they went to the front door and eventually got in after waiting in line. Pete came directly to the back door and asked if I would consider being his tour manager!

“Then there was the night that Ryan Adams told me I was his Austin Mama. And the night a belligerent chick kicked me in the shin with her steel-­toed boot.”

Die-hard Jimi Hendrix fan and self-proclaimed FredHead – a Fred Eaglesmith follower – her first record purchase was “The Ballad of Davy Crockett” by Bill Hayes. Scott lives for music, no doubt about it.

“There’s a visceral reaction. You know what a roller coaster feels like? It’s that feeling! Robin Trower’s opening riff on ‘Into the Flame’ grabs me just as hard as the lyrics to Jon Dee Graham’s ‘October.’

“I’ve made many friends through my love of music. There’s a commonality amongst music lovers. If someone likes the same musicians as you, it’s like you’ve found your tribe.”

Next time you go to the Continental Club, take a moment to talk to Scott. If you’re lucky, she’ll tell you a story, but never a secret.