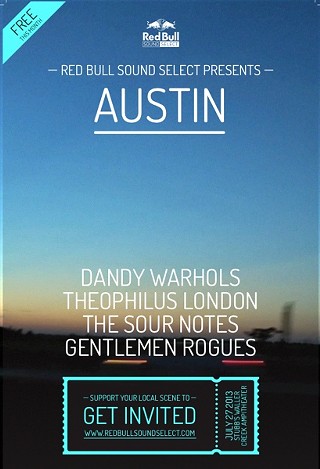 Stubb’s outdoor stage hosts local micro-indie acts most notably as openers for big roadshows. Come July 27, Sour Notes and Gentlemen Rogues become the latest Austinities getting the chance. Thanks to a slick promotion structure orchestrated by Red Bull, the pair of pop bands plug in on the big stage alongside Dandy Warhols and Theophilus London.

The series kicked off locally at Holy Mountain in February, with a four-band bill curated by Ume’s Lauren Larson, a lineup that included the aforementioned locals and Not in the Face. Since then it’s rolled through regularly, culminating with a South by Southwest throwdown that included the Sword, Sour Notes, Girl in a Coma, and the Smashing Pumpkins.

Red River’s July 27 date slots in as the first show Red Bull’s throwing at Stubb’s. That’s good news for the Rogues and Sour Notes, both of whom describe themselves as some iteration of “DIY to the bone.”

“We can’t afford a publicist because we’re all pretty broke,” explains Jared Paul Boulanger, guitarist for the Sour Notes. “So it’s nice to have fairy godmothers like the Red Bull team working hard to push us and secure us more opportunities.”

“Gentlemen Rogues is small, and considerably unknown,” adds GR guitarist Danny Dunlap, who in March celebrated the release of his band’s debut EP. “To this day, we play local shows, and have people come up to us afterwards and say, ‘Man, you were awesome. Where you from?’

“What Red Bull has done,” he continues, “is provide us an amazing opportunity to get up there and prove ourselves, and, as a result, I’m hoping to get the, ‘You guys kick ass! Where you from?’ less often.

“It seems [Red Bull] genuinely wants to help us succeed, and we’re really grateful to them for being in our corner.”

Tickets for the four-bill show are free if you click this link, scroll to the bottom of the page, and request a ticket. There’s a catch: Your ticket comes personally handpicked by a member of the Gentlemen Rogues or Sour Notes, so just clicking on the request button doesn’t automatically grant you access. The lottery closes today.

Okay, chances that you lose out are still pretty slim. Stubb’s’ outdoor capacity resides north of 2,000, which by the Gentlemen Rogues’ standards shoots the moon.

“I literally almost threw up when we were asked to play this show,” Dunlap confirms. “I’m very nervous... in a good way.”