Mastersons at the ready (by William Harries Graham)

Eleanor Whitmore and Chris Masterson met after a show in Steamboat Springs, CO., and have been inseparable ever since. This August marks their four-year wedding anniversary.

The two songwriters are very much in love, connecting musically on a telepathic level. They laugh constantly. Together, they’re New West Records recording artists the Mastersons, and they’ve been touring with Steve Earle. The two parties met in Australia through mutual friend Stephen Bruton.

“He’s musically fearless,” Masterson says of Earle. “He gets players around him that he likes, and he lets you be yourself. And while he’s opinionated about politics and baseball, musically he doesn’t stand in people’s way. Steve’s been really good to us.

“He hired us both to be in his band, so as a couple we get to travel together and open the shows. It’s incredible. We really owe a lot to Steve.”

Last Christmas, mere months after celebrating the release of debut album Birds Fly South, recorded in Austin, the Mastersons packed up their New York City apartment and moved to Austin for good. They say the city’s slower pace, which they’ve been able to enjoy when they’re not on the road, has done wonders for their sanity.

“Living in a small apartment in New York, we became part of each other’s music,” Masterson explains. “I’d write a song and Eleanor would walk in and say, ‘I’ve got a bridge for that.’”

Whitmore describes being married to your bandmate as “challenging,” and Masterson goes deeper.

“The highs are high and the lows are low. Because the higher the level of intimacy, the lower the level of professionalism. We all treat people that we love in a different way. Being professional is one thing, but if Eleanor tells me I’m flat, I can say, “Fuck you!”

He explains their band’s sound as an assembly of harmonies “with a touch of British pop songs, fiddle, pedal steel, and the fact that we’re both Southern.”

Whitmore’s mother is an opera singer; her dad sings folk songs. She grew up listening to covers of Bob Dylan and the Beatles.

“I’m a lover of the song,” she explains, “especially the pop song in the Beatles tradition.”

“You take a husband-and-wife dynamic and then add the sister dynamic and it’s great,” says Masterson, “but it can get screwy really fast. When it works, it’s better than anything."

The Mastersons are special guests at the Proper Nang this Saturday, July 6, at Maria’s Taco Xpress. Catch them before they head back on tour with Steve Earle next week. 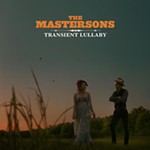