The Eyes of Texas

The night my alma mater finally made sense 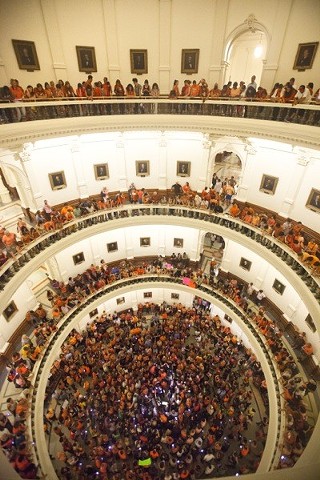 The eyes of the Texas state Capitol rotunda (by Jana Birchum)

I first heard my alma mater at orientation. No one struggled with it (basically “I’ve Been Working on the Railroad”), but as indoctrination, bright-eyed freshmen sectioned off to study “The Eyes of Texas” lyrics, prepping for quizzes. My local band obsessions developed over the years at UT, but this was the first song I associated with Austin.

“The eyes of Texas are upon you/All the livelong day”

Despite the pride I felt singing with thousands of my peers, the lyrics seemed cumbersome. That first line made me picture University of Texas President Bill Powers watching from the Tower in Orwellian surveillance. I wasn’t sure what these eyes were watching, but after parroting the lines several hundred times, I stopped thinking about what they meant.

Flash forward to Tuesday night as thousands in the Capitol sang those same words that didn’t make sense to me at football games and graduation yet suddenly slid into focus.

“The eyes of Texas are upon you/You cannot get away”

After a futile attempt to brave the lines back into the senate chamber gallery, which had bloated to fill all three floors when I’d stepped out, I resigned to join the masses and wait for news. Sen. Wendy Davis approached hour 10 of filibustering the controversial SB 5, a bill that would all but squash safe abortion access for millions of Texas women.

As the resident social media addict, my friends put me in charge of monitoring the latest Twitter updates from dedicated reporters and activists inside the chamber. Amid the siege, I experienced “the eyes of Texas are upon you,” aimed at both Lieutenant Governor Dewhurst and Davis, to starkly contrasting effect. That, coupled with the burnt orange shirts sported by pro-choice activist (the only color available for a screen-printing rush bulk order), seemed a little out of place a mile south of the 40 acres. And it wasn’t just the eyes of Texas, but those of 183,000 across the globe locked into the Texas Tribune’s online feed.

I’d spent most of the day at the Capitol, first shuffling through security at 9:30am behind two old women in orange dresses, off to continue a battle they’d waged with Roe v. Wade. As instructed, the “feminist army” began to fill the gallery as soon as it opened, greeted by Cecile Richards, Planned Parenthood president and daughter of the great Ann Richards. The early risers effectively corralled the blue-clad pockets of anti-abortion supporters into two slivers of the gallery.

Despite the high stakes, the gallery guests remained quiet and respectful, unable to clap or cheer as per decorum. It was only as midnight approached and Dewhurst blatantly ignored Sen. Leticia Van De Putte’s motion to adjourn that the dam broke.

“At what point must a female senator raise her hand or voice to be recognized over the male colleagues in the room?,” she demanded.

As the gallery erupted with chants of “Let her speak,” the rotunda joined in, bleeding into the room and successfully running out the session with a near-15-minute roar. Do not think you can escape the eyes of Texas.

It wasn’t until 3am that Father Time Dewhurst determined that the vote for SB 5, which passed, occurred after the special session expired. Hundreds of thousands of spectators and senate Democrats already knew this, of course. Still, it was three hours after the fact that Dewhurst admitted defeat, three hours that supporters stood in the marbled rotunda awaiting word on if their rights would be stripped by a gross abuse of the democratic process.

Finally, Cecile Richards delivered the news to a tearful, grateful crowd of almost exclusively orange. Before she left, she led the crowd in one final rallying cry: “The Eyes of Texas.”

The voices weren’t polished like the walls they bounced off. The collective missed pitches and sometimes the entire key, but the hundreds of people rising up in emotional catharsis produced the most beautiful rendition I’ve heard. The 110-year old song was suddenly contemporary. It wasn’t the state of Texas instituting surveillance on me, but rather the citizens of Texas watching out for each other.

I was the eyes of Texas.