A soundtrack for your chicken posole 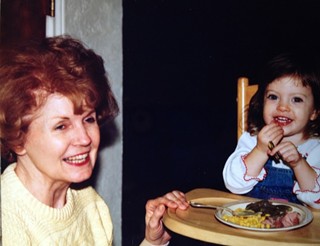 The author and her inspiration, both in younger days. (by Courtesy of Abby Johnston)

Music always accompanied cooking in our family. Alongside clanking pots and the sizzle of the stovetop, there was always singing in my grandmother’s kitchen.

The bouffant-haired preacher’s wife operated on the schedule of all great Southern matriarchs: As soon as the last lunch dish dried, it was time to start dinner. That meant her wavering soprano was in constant sync with the trusty egg timer.

My grandmother’s homestyle cooking kept my grandfather pleasantly plump and the Baptist women in town begging for tips. But despite her constant song birding as she crafted meals, she couldn’t hit a pitch if she had Jesus himself as a vocal coach. Hymns and her favorite Blues Brothers songs (she even tried emulating Erykah Badu around Blues Brothers 2000, occasionally) were continually butchered in an endearing, albeit unnerving way. But man, that cornbread could sure make up for it.

As I’ve built a kitchen of my own, I’ve inherited my grandmother’s affinity for cooking to a melody, but I prefer to let other people do the singing. Here’s a quick combo: an old Tex-Mex favorite, and a playlist of Austin singers whose voices accompany cooking much better than my dear old Mimi’s.

Heat two tablespoons of vegetable oil over medium-high heat until shimmering. Add chicken breasts and cook until the juices run clear, around 20 minutes. Remove from skillet to drain. When cool enough to handle, shred or cube chicken. I prefer to shred it with a fork.

Heat two more tablespoons of vegetable oil using the same skillet over medium-high heat. Sauté onion and garlic until soft and transparent, but not too brown. Return the chicken to the skillet. Stir in chicken broth, water, oregano, salt and chili powder.

Reduce heat to low, cover and cook 80 - 90 minutes. Stir in the hominy and cook for about 15 additional minutes, until tender. Correct seasonings with salt and chili powder, if desired.

The playlist isn’t as spicy as the posole, but by personal preference, I don’t like to get too amped when I’m cooking. Making food is one of my favorite and most relaxing parts of the day; this playlist matches that aesthetic.