A bachelor in my 40s, I’d never seen a pressure cooker until my final girlfriend whipped up a pot roast in hers on about our fifth date. That’s when she had me. Now married, we’re fonder of that crock pot than most cooking implements. There’s no love of the blender, for instance. I put it down to the time my mate shrugged and threw a handful of weed into it.

We’d both been to Amsterdam – remember “Hamsterdam” in The Wire? – so we were well acquainted with baked goods, edibles not us. Had she? Not me.

Not until our second date that is, a Chronicle Christmas party. There we were, loitering around my desk at the then-corner of Beirut and Lebanon, when the office manager came by with a basketful of cookies, a gift from a sister business that knows us all too well. Welcome to Mad Men & Groovy Gals.

“Magic cookies,” grinned she, without whom all of us at the paper would have perished long ago. Every office needs a mother, because as MASH pointed out decades ago, every army travels on its stomach. We each plucked out a cookie, ate it, and went on about our business.

True, we ended up back at her South Austin pad that night. And yes, together we made a spot inspection of the carpet in her living room before I returned to midtown. Yet where to draw the line between sweets-inspired snogging, holiday spirit, and kismet? Neither do I recall how the subject came up later.

There we were, though, Googling. How much pot to how many parts butter for the right self-roast? Being a cook, one of those fabulous creatures unafraid to throw anything together with the help of a book or website, she had her eyeballing down – no problem. Me being the dude, I threw another handful in for good measure. Bad idea. We were paralyzed to her couch all weekend. Was that the same Saturday we started streaming Netflix? I recall Blade Runner through the haze.

We tried it again, only this time I kept my nose out of it. Better – functionality. We were on a roll.

Brownies, cornbread, carrot cake muffins; amazing all the things that require butter. And what could be easier? Throw in your herb – seeds, stems, the whole lot – add a few bars of Land O’Lakes, and set the pressure cooker to five hours. Afterward, strain the underbrush out over some cheese cloth. Green oil, Texas tea. My favorite application remains mashed potatoes. That following holiday season found me handing out Tupperware treats as Thanksgiving leftovers.

The difference between a hooka and wolfing down a cookie? About the same as that between Listerine and a single malt scotch. One’s surface, the other’s a deep down body glow. The latter will also take down your immune system quicker than a SWAT team. More than once have I come to with a cold. These days I mostly leave the baked goods to Hamsterdam.

Then dawned April 27 at Carson Creek Ranch. Austin Psych Fest! Spring music festivals mean the apocalypse for me annually. From mid-February to the last day of Chaos in Tejas at the start of June, they bombard me like Dresden during WWII. Bane of my blessed job.

That morning brought a break in the action. I’d spent Arbor Day “making toothpicks out of logs” (Montrose!), and when the office supercedes music, bared teeth appear. Kept from Carson Creek Friday, I woke to a cool, cloudy, perfect spring Saturday, and prepared for a 10-hour day of festivaling out in the wilds by the airport. Hat, boots, notepad – check. Flask? Never imbibe and drive.

I wondered, though – out of nowhere and apropos to nothing, really: Were there any cookies in the freezer? My better half was out back wrestling the yard, so I yanked out the bottom half of our fridge and sure enough, a frosted bag of chocolate chip cookies. The last ones. Bingolingus.

I hadn’t been at Carson Creek’s idyllic spot for more than 90 minutes before I noticed myself becoming entranced with the flightpath directly overhead. Planes were gliding in so limbo-lower-now, that you could almost jump up and catch a hold of their landing gear. Every time a jet whooshed by, I imagined my body yanked into the air and rocketed to the airport or beyond, hanging onto Southwest Airlines for dear life.

In a day that pinwheeled one mind-boggling act after another at Austin’s own Isle of Man, from the first U.S. appearance of Sixties UK psych pastoralists Kaleidoscope and Japanese rock overlords Boris to Aussie goths Black Ryder and Atlanta’s Martians Man or Astro Man? touching off a lightning storm/deluge at the end of the night, Psych Fest that day matched one of its mad scientist’s monikers: Brain Pulse Music. I achieved it on the second or third act of the afternoon.

Bilbao’s Capsula already had its cover of David Bowie’s The Rise & Fall of Ziggy Stardust and the Spiders from Mars in the can when the Spanish/Argentine trio enlisted Tony Visconti to produce its album this fall. The Man Who Fell to Earth and the Brooklyn Boy have dialed in outer and inner space together since 1969’s Space Oddity, including Low/Heroes/Lodger, Scary Monsters, Heathen, and even this year’s comeback, The Next Day. Now Visconti, who collaborated with Alejandro Escovedo on his last three killer platters, has laid hands on the glittering glam rock of Capsula with his CV touchstones including T. Rex and Thin Lizzy.

In the throws of Capsula’s all-too-brief Psych Fest set, sometime after “Moonage Daydream,” my watercolors began to run. There weren’t psychedelic air tracers dilating my pupils after every drum crash, hair whip, and electric guitar abuse, but the band’s performance had morphed into 4-D for me. Engagement wasn’t stopping at the lip of the stage. In my vision, I was up there dancing – and not with the band, but rather some demon/angel/reptile upright on cloven hooves that Capsula’s undulating Screamadelica had conjured for me.

It was exhilarating and frightening all at once, and it happened in the literal blink of an eye. For when I looked down into my notebook and saw the last scrawl of my eventual “Live Shot,” I realized the cookie monster had eaten me whole. 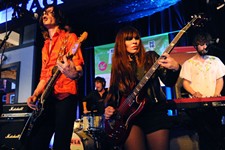