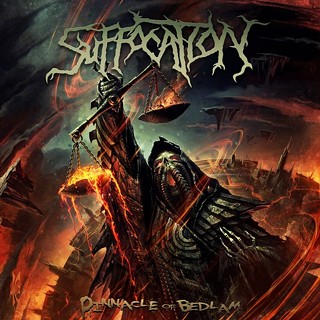 This morning Austin's newest film and music festival proclaimed, "The blood oath has been signed." The biggest part of the announcement is that Mullen will be fronting the band for this very special show. Arguably the godfather of that death metal roar, he stepped aside from regular touring in 2012, with Bill Robinson of Decrepit Birth and John Gallagher of Dying Fetus stepping into the breach.

Suffocation join an already crammed lineup that includes headliners Gwar, Goblin, Down, Philip H. Anselmo and the Illegals and more. On the film side, the festival has announced special screenings by German gore auteur Jörg Buttgereit and Brazilian horror pioneer Coffin Joe, plus the US premier of new anthology The Profane Exhibit, and a special live soundtrack to Suspiria performed by Goblin.