Shaping the sound of Austin in 2018 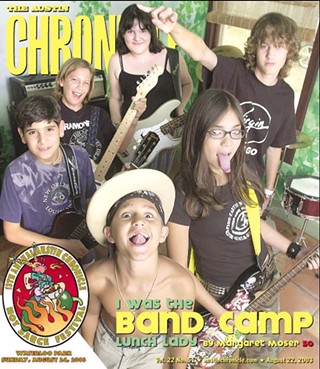 Pardon me stepping into William Harries Graham’s formidable shoes, dear parents, but if your budding rock star isn’t already booked up this summer, there’s time to consider one of the several kids music camps that still have openings.

Austin jumped on the teen rock bandwagon in 1991, when guitarist and singer-songwriter Michele Murphy decided Austin’s younger generation needed to not just learn rock & roll, but TEXAS rock & roll. And by ear, not reading. Murphy’s Natural Ear Music Camp was a forward-thinking and brave move that kept the bar for kids high.

When Murphy moved to Liberty Hill some years ago (and served as mayor), bassist John Moyer took over, carrying the good work down to San Antonio too, while still playing with Disturbed and most recently Queensryche. Summer camp sessions are two weeks long and run June 10-21, with two more sessions in July and August.

In the subsequent 20-plus years, music camps for kids bloomed like bluebonnets in spring, turning out many of Austin’s current up-and-comers, some getting-theres, and a few in-placers, including Speak’s Troup Gammage, Ray Wylie guitarist Lucas Hubbard, singer-songwriter Ariel Abshire, guitarist Will Knaak, and singer Jenny Wolfe. Today’s camps each have their specialty, too, and offer participants a broad base of influence by employing local musicians as teachers.

Girls Rock Austin summer camp has openings for its three-week-long summer sessions, including June 17-22. Because of its obvious gender specialty, GRA not only teaches rock music and music skills to girls, but also emphasizes self-esteem, fun, and friendship as part of the program.

At GRA a few summers back, I introduced Miss Lavelle White to the girls, urging them to listen to the way she phrased her lyrics and to her between-song patter. It’s always an honor to tell an audience what they’re about to see, but to tell them to watch for her magic and then see her do it for these teens and pre-teen girls was so see Miss Lavelle at her best, charming them all the way.

Band Aid School of Music offers a two-week session June 10-21, with a second one in July. They encourage original music, but let bands choose material. BASM’s James Mays also produces the annual U18 showcase, the Kids Are Alright Festival.

School of Rock – yes, the original that inspired the Richard Linklater/Jack Black film – has year-round programs, including summer sessions. Austin School of Music starts the first of three two-week summer sessions on June 17, while Red Leaf School of Music will have a July session only for summer. The Peterson Brothers were feature players in last year’s Blues Camp, but it moved to Galveston for 2013.

Not in your budget? Most camps, like the nonprofit Girls Rock Austin, offer financial aid. Investing in art for kids should never be a burden.