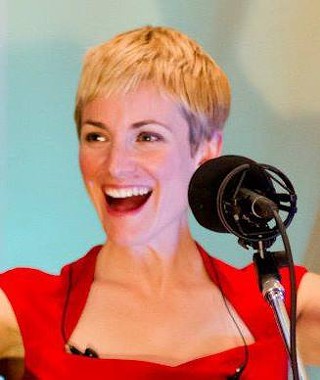 Erin Ivey, in a celebratory mood (by Facebook.com/ErinIveyMusic)

Unlike many local acts who gig constantly, Erin Ivey shows up only on special occasions. Friday, the petite singer-songwriter celebrates her new live album, Dreamy Weather, at Club DeVille in what promises to be an eclectic evening of surprises.

“I always want to throw a party that I would go to,” says Ivey. “That requires a tequila sponsorship. It requires chocolate. It requires really great people and music.”

Ivey and her band open the night, with the glittery pop of Moonlight Towers afterward, and DJ sets from Mixer Rogers and DJ Gatsby. If pairing up with Moonlight Towers seems like an odd choice, remember Ivey and that band’s leader James Stevens became fast friends when she recorded her last album, Broken Gold, at his studio. Ivey also sang on Moonlight Towers’ most recent album, Day is the New Night.

“There’s no pitch correction, no overdubs,” she stresses. “What you hear is what we did on that night. So that’s a little nerve-racking to put out there, because it’s not perfect.”

Like the best music, it’s attractive because it’s real. And if a live album at this point in her career sounds like a place holder, that’s just fine with Ivey.

“I didn’t have an official live recording,” she says. “I wanted to have something come out between Broken Gold and my next project, Austin Lullabies, which was [recorded] with the Tosca String Quartet. This is a good bridge between the two because there’s some brand new songs and there’s some older songs.

She adds that Lullabies is done and should be out before Christmas, but that claim comes with an asterisk.

“I’m choosing my own adventure on this journey now,” she shrugs, “so that will probably change.”

The most surprising aspect of Dreamy Weather came with Ivey’s decision to fund the album’s production through Kickstarter, where she raised 154% of her intended $7,585 goal. Some artists view the crowd funding model as problematic on a number of levels. For Ivey, it was exactly what she needed.

“It was awesome,” she enthuses. “I did Broken Gold on my own and it was a nebulous, learning experience. The 10 percent [Kickstarter takes, for service fees], the backend stuff that they do, the updates, keeping track of who, where, and when was so worth it. You have to work the system. You also have to have a couple of people in your back pocket so that if you don’t make your goal, they will either give you a loan or help you make your goal.”

She’s discovered that people go to Kickstarter with the idea of funding projects they find interesting without knowing who it’s supporting.

“The fees I paid to Kickstarter were made up for and then some by the folks who found me simply because I was on there,” posits Ivey. “Those people weren’t searching for me specifically. They looked for an Austin page or a folk music page and then became my supporters, my fans. Money from Broken Gold sales go to the record label that released it. Money from the sales of Dreamy Weather goes towards putting gas in my car and paying the bills.

“So Kickstarter supporters really set me up to not only release Dreamy Weather, but to have merch going forward and keep me going. It really helps that I didn’t have to go into debt for all of this.”

Golden Girl
Erin Ivey gets closer to the edge 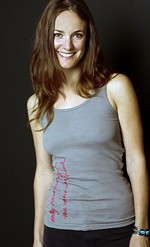 Dancing and Singing With Dry Cleaning
Erin Ivey's talents are many