Putting the power and violence into hardcore 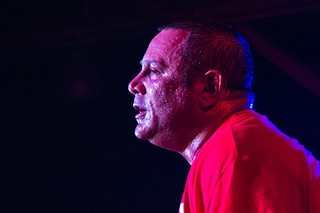 Infest played 31 songs in 32 minutes last night. I know this because I kept a stopwatch running in my pocket and a pen in my hand, drawing another dash on my forearm each time the reunited California hardcore heroes kicked out another song.

I would’ve used my notepad, but it got ripped from my pocket and trampled into trash at the onset of the band’s performance. Infest broke up in 1996 and, before last night, had never played a show in the state of Texas. The restless, notably straight-edge crowd could hardly wait. They’d already started moshing before the soundcheck.

Once singer Joe Denunzio, who has the body of a retired rugby player and a face that wouldn’t blink if you smashed it with a two-by-four, picked up the microphone, he ushered in a hostile mosh pit that found stage divers walking on the fronts of other people’s faces, climbing support beams like cockroaches, and turning trash cans and beers into projectile ammunition.

During “Cold Inside,” which lasted just about a minute, a bald, shirtless man got Olympic level distance off a stage dive and landed with his hand inside my mouth, splitting my two lips and leaving me tasting blood. When the scrum elevated me onstage, I front flipped back into the horde only to have two other simultaneous jumpers land on top of me and send me crashing to the concrete.

Feeling the pain of a wrecked back, I limped to the side of the dingy 1100 E. Fifth Warehouse, where several other pit casualties laid out and listened to closer “Where’s the Unity” while wondering “Where’s the ambulance?” They don’t call that kind of music “power violence” for nothing.