A schism split Red 7 in half Thursday. The heat hung low inside the club, caked with dewy sweat from dudes in spikes and stinky leather. Clad and dedicated for a night of wrought-iron punk and metal, they probably spat through their teeth at the collegiate crowd outside for Parquet Courts.

Simultaneously alluring and confounding, Chaos in Tejas’ diverse billing leads to some awkward crowd combinations. So while Bitter End and Benediction tore the guts out of Red 7, the balmy backyard played host to a quartet of easygoing, moth-eaten indie bands. I don’t think zonked Olympia, Wa., retro rockers Milk Music were grabbing any beers with Bitter End after their respective performances.

Conceived in Brooklyn but born out of the vibrant art scene at the University of North Texas, Parquet Courts carry a credited Austin cache. Singer Andrew Savage has clocked time with the lovable smartasses in Denton experimental duo Fergus & Geronimo, and the Courts’ acutely self-aware 2012 sophomore effort Light Up Gold cashes in on the misanthropy, self-deprecation, and generally sniping cultural observations that’s made his former bandmates so delightful.

The best part about last night was seeing the way in which Parquet Courts has grown up. Light Up Gold, though it helped to make the band the talk of Pitchfork town, sometimes sounds like it was recorded with an amplifier smaller than your swollen fist. That’s not the way things go anymore.

PC’s rhythm section proved sturdy and its guitars have grown angry. Even the split-through-the-middle vocal arrangements from Savage and fellow guitarist Austin Brown seemed to arrive spelled out in blood. With that polish, the indelible riffage on songs like “Borrowed Time” could stretch out into infinity. 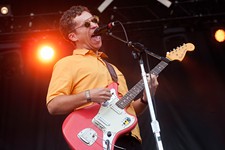