If a rapper raps and nobody’s there to hear it... 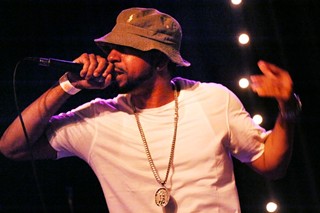 The two New York City rappers, chums in Gotham alongside verbal sous chef Action Bronson, made the 1,800-mile trek down to Austin on relatively short notice (Mobb Deep’s out? What’s Roc Marciano doing?) only to perform for fewer than 70 fans, many of whom were more consumed with milling about than actually taking stock in the show. Breaks between songs fell so quiet you could hear an iPhone vibrate.

The lack of audience rattled Marciano most. A hard-nosed rapper from Long Island who’s surely taken a lesson or two from Mobb Deep’s duo of Prodigy and Havoc, he implored the fading audience to make some semblance of sound at every opportunity, telling the five dozen that he wanted the ND to “feel like there’s 1,000 people in here.”

Fat chance. You could find more people standing in line to get into the Damned show last night.

Mayhem Lauren didn’t seem to mind as much. The big-bodied MC, recently behind the diverse and entertaining Mishka NYC mixtape Mandatory Brunch Meetings, went about his business as if the show were a sellout, saying, “This crowd is really good for my self-esteem” before launching into some diatribe about the quality of brisket here.

Hopefully Meyhem finds the time to hit up Franklin, House Park Barbecue, or some other joint for lunch this weekend. Otherwise, this trip might’ve been a wash. 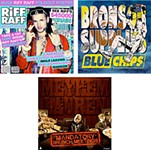