Animals in the Median

Radiation City, your past, present & future – on cassette! 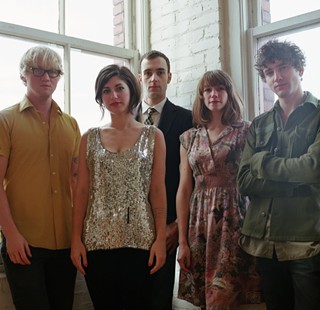 Radiation City, thinking about that land before time.

Radiation City, one of the most exciting up-and-coming bands in Portland, Ore., plays an all-ages show at the Mohawk on Tuesday, June 4. I caught up with drummer Randy Bemrose as they make their way through the U.S. on a 29-date tour.

I first discovered Radiation City after hearing their new single “Zombies” off this spring’s Animals in the Median, the band’s second album. It’s a catchy indie-pop tune that Bemrose considers an allegory “both in terms of art and commerce relating to modern culture at large.”

“Dystopia weighs heavy in the air and within our minds,” he explains. “We’ve often said to people looking for a more visual representation of our sound that it comes from a past in a very damaged future found in a time capsule amidst a ruined city.”

Or, you know, Portland, that funky, rain-soaked utopia of green trees and black coffee; that epicenter of Pacific Northwestern creativity where the cost of living’s low and the influx of artists remains high.

“The degrees of separation are diminished [in Portland],” says Bemrose. “There isn’t that do-or-die ethos that you see in places like New York or Los Angeles. It’s not super competitive. It’s a supportive city. There’s a wealth of people to play with, learn from, or grow with.”

Bemrose adds that the reverence for making music that harks back to more imaginative time periods has helped create a certain band affinity for cassette tapes, that reel-to-reel medium that’s recently been making a comeback. Radiation City’s 2011 debut, The Hands That Take You, arrived on cassette, and second album Animals packages up the same way.

“We’ve lost a lot of ones and zeroes from the digital age,” reasons the drummer. “Right now, more people are taking more pictures than any time in history, but the clouds where data is stored are finite and do dissipate eventually, if not steadily. Not that a medium like cassette tapes don’t age, but they do so a bit more gracefully than a CD or a worn-out hard drive.”

Bemrose advises that young musicians just starting to gig should “practice with a mirror” and “make loud mistakes.”

“Work on your form first, then dynamics, then speed,” he offers. “And keep it real.”