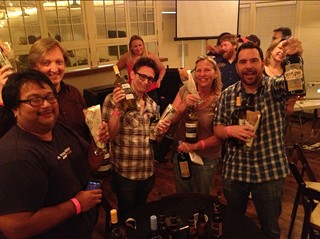 Last night’s Mind Over Music at the Palm Door had all the wonder and suspense of your usual trivia night, only with a score more geeks who hang out at record stores. The fourth annual fundraiser, put on by the Chronicle, finished after three hours of brain-racking competition with one clear champ: the radio whiz kids at KUTX.

Those four squads eventually made it to a playoff round that asked teams to answer “true or false” to the claim that a particular sets of lyrics were written by particular songwriters. The Chronicle lost when some absent-minded hip-hop writer named Chase Hoffberger failed to properly identify a lyric (“Here’s a perfect description of me: Six-foot-one, dark and lovely”) as Big Daddy Kane’s when it belongs to LL Cool J.

Speaking of rappers, a surprise guest showed up last night. Beside me at the Arlyn Studios table sat Bushwick Bill, the diminutive and iconic member of the Geto Boys, who’s been hanging out at the South Austin studio for a few months now recording his seventh solo album.

Bill couldn’t do much to bring Arlyn to glory – the team, comprised of Bill, Gordie Johnson, and studio partners Freddy Fletcher, Will Bridges, and T. Martin, didn’t qualify for the playoffs – but he did help his squad pick up an unexpected five points when event host Andy Langer invited him up to the front of the room to freestyle for the crowd.

He also took a few minutes out of his night to chat it up with Willie Nelson’s older sister Bobbie, which is a conversation I never thought I’d see in my lifetime.

Great night. Congratulations to the winners. We’ll be back to reclaim the crown next year.