The Priests of Syrinx

What’s in a Rock & Roll Hall of Fame anyway? 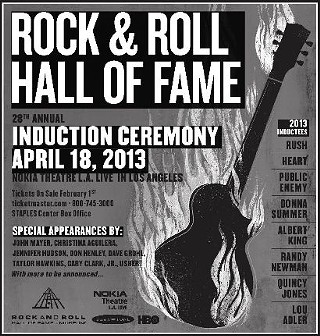 When did the Rock & Roll Hall of Fame induction ceremony become the Oscars? A nearly three-hour run-time, teleprompter eyes, and enough hair dye to deluge AARP fall in perfect lockstep with filmdom’s annual backslapping. The ultimate tie-in? Jack Nicholson sits in the front row of both. Watch the music blow-out on HBO tomorrow.

Two-time Academy Award-winner and 20-time nominee, Randy Newman opened the April 18 show in Los Angeles sitting at the ivories. You almost expected him to plink out one of his tunes from a Disney cartoon. Instead, it’s “I Love L.A.,” and soon they’re lighting three performers at three mics all in a row to the right of the piano.

The highlight reel flashing his worth lasts longer than the Academy of Motion Pictures teases before Texan Don Henley steps to the podium for Newman’s induction speech. It’s one the first in a myriad of Lone Star tie-ins. The Eagles’ drummer begins typically cantankerous (“I love L.A. – it took me an hour and a half to get here”), but soon the hyperbole and superlatives are flowing like party favors at the Hotel California.

“I saw [Newman] perform live in Texas last year,” muses Henley. “And he tore the roof off the place. When you can get 2,000 Texans to stand up and applaud a song like ‘Rednecks’ – in a state that elected Rick Perry three times in a row – you’re a helluva artist.”

This we know – most recently when Newman taped an Austin City Limits episode in 2011. Yet Henley’s not wrong when he finishes arguably the best coronation of the evening by inducting Newman “into this peculiar and perplexing organization 20 years after he became eligible.” The statuette still looks like a high school theater prop – try something akin to a gold or platinum record award – but Newman takes up Henley’s gauntlet and jokes about thinking he’d be viewing his entrance into the R&RHOF posthumously.

“Watching from below with my relatives,” quips the composer.

In addition to “I Think It’s Gonna Rain Today,” Newman performs “I’m Dead But I Don’t Know It,” trading verses with Henley on a song he dedicates to all young musicians struggling to find a suitable stage not filled with graying dinosaurs. You know, those high-dollar HOF acts who don’t know it’s their audience watching theses taxidermied heroes from below.

The broadcast’s second of three main enthronements comes next, Stevie Ray Vaughan touchstone Albert King. Sure enough, there’s the two bluesmen’s In Session DVD summit in the video introduction, followed by John Mayer in a trademark King suit and strapped into a wicked Flying V guitar. Where old schoolers will initially groan – why not Eric Clapton or Santana to spray King’s glories like their own protege fireworks? – Mayer’s speech comes in note-perfect.

Before you can admit “bravo” – and after a heartfelt acceptance by King’s granddaughter, who also pays tribute to SRV (“I like to believe they’re jamming together in heaven making the angeles dance”) – Austin’s newly anointed guitar god Gary Clark Jr. opens the musical tribute to King with “Oh Pretty Woman.” He and Mayer then trading licks on King’s signature “Born Under a Bad Sign” as Booker T. Jones take a verse may not be Clapton and Santana exchanging scorch at the first Crossroads Guitar Festival in Dallas, but it’s enough to assure crusty old Antone’s boosters like myself that no, Virginia, the blues aren’t dead and buried.

After that, the segments get shorter – one number only – and the speechifying leaner and the thank-yous deeper and more affecting. Cheech & Chong (at the Moody Theater on May 31) honoring pop mogul Lou Adler prior to Carole King singing “So Far Away”; Donna Summer’s three daughters and husband of 32 years maintaining their composure and gratitude in the face of the disco diva’s death last year (Jennifer Hudson slays “Last Dance”); and Usher acing Michael Jackson’s “Rock With You” for the song’s producer Quincy Jones, who nets no less than Oprah Winfrey for his introduction.

That’s nothing compared to Spike Lee making way for the Harry Belafonte to wax statesman-like on Public Enemy.

You ain’t gangsta until you’ve witnessed Belafonte flex his extraordinary presence and dignity in the name of rap, quoting “Fight the Power” and “Don’t Believe the Hype” before Chuck D, Flavor Flav, and the rest of the P.E. crew turn the lily-white auditorium into Lou Adler-like honorary hip-hoppers.

Heart should’ve chosen someone with a little more poetry than tan for the Seattle band’s honorarium. Say guitarist Nancy Wilson’s husband Cameron Crowe, yet hometown mensch Chris Cornell rallies past a GED start. Wilson’s speech shames the male-centric music industry with drop-dead gorgeous grace: “We came from an era when women normally did not rock. Women were not expected to be leaders. There were mainly four jobs for us to chose from – teachers, mothers, nurses, or waitresses.”

Ann Wilson gets crystal hippie in her acknowledgement, but Heart’s banshee singer hasn’t lost a note.

When the original band reunites for “Crazy on You,” Ann Wilson pulls some vocal peaks to make your hair stand on end. In light of that, the succeeding all-star jam with the sisters’ current band and a three-guitar addition of Cornell, Pearl Jam’s Mike McCready, and Alice in Chains’ Jerry Cantrell on a lumbering “Barracuda” defines ill-advised.

Like the Academy Awards, which I’ve watched yearly my entire life, by this point in the show you’re thinking more about self-immolation than the grand prize. Except, of course, this 28th annual R&RHOF gathering boiled down to one unlikely headliner. In fact, had their name not come first on the screener, I wouldn’t have bothered. Like the band’s drummer began with, “We’ve been saying for a long time that this wasn’t a big deal. Turns out it kinda is.”

How big a deal? That Rush’s drummer Neil Peart was even there with his bandmates Geddy Lee and Alez Lifeson – the man who after each 2.5-hour concert leaps off the drum riser and literally runs off-stage like it’s on fire – testifies to the Canadian power trio’s happiness at the occasion.

As with John Mayer and Chris Cornell previously, Dave Grohl – though not Foo Fighters drummer Taylor Hawkins, also along for the ride – initially smells like the wrong choice to talk up Rush. Of course he’s brilliantly inspired. Peart later speaks to what Grohl accomplishes by invoking Dylan, who pinpointed that there’s only one thing any artist can hope to do for an audience: inspire. Hawkins holds up his end by more or less calling Peart the father of air-drumming, while adding just how unique Rush remains.

Primed by the Foos and pride swollen by Peart, plus nearly in tears from the hilarity of Lifeson’s pontificating – he talks for three or four minutes without saying a word other than “blah” – I felt like my kids were graduating college. At my own alma mater, after a year and a half of Led Zeppelin 24/7 (I was a Stones man growing up), my sophomore year was wall-to-wall Rush. What album today, what album tonight?

In the almost 30 years since, other than Mick & Keith, no arena act comes close in my personal attendance other than Rush. Without anticipating it, and certainly without much credence for the “peculiar and perplexing organization” that is the Rock & Roll Hall of Fame (the actual museum’s well worth the pilgrimage to Cleveland), it turns out that Rush being singled out in the rock & roll constellation (“one tiny point of light shaped like a maple leaf,” said Peart) was a big deal for me.

Any individual’s bond to a band or musician involves integrity. Somehow that act never let you down, through Hall of Fame-caliber LPs and performances to regurgitated filler and phoned-in shows. Through thick and thin, on a music level they were there for you at every point, a rock to cling to in a scary world. Beatles, Stones, Rush, Usher – take your pick. Musical taste remains as individual as punks and snowflakes, but your base jams are sacred. 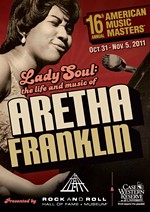 The Rock & Roll Hall of Fame: Men Only
It’s only rock & roll – except for women